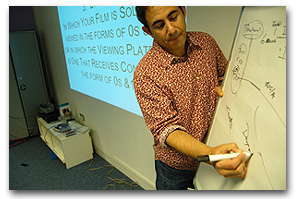 ‘More than an education. It’s a revelation.’

I couldn’t have said it better myself. It’s been a week since we ran the landmark Distribution in 2010 Workshop with John Reiss and Sheri Candler. And still everyone who attended can feel the ripples of this new and powerful way to approach distribution that John and Sheri shared with us all. And the end result for those who attended? A sustainable business that will grow with them as a film maker, artist and entrepreneur.

I am writing this blog on the train as I speed my way to Cannes. As Judy said on last weeks show, ‘you know you are in trouble when you look forward to Cannes for a rest!’ It’s been that kind of week. Heck, it’s been that kind of month. And that’s why it’s taken me a full week to get the video edited and the feedback typed up.

And it was only then that I realized that I had in fact become the PMD for the workshop – I had enlisted the help of Leilani Holmes from OTT films to diligently tweet the best bits form the workshop, I had taken all the photos, I had been Facebooking throughout, shooting the video, editing the video… And I can tell you, it’s a pile of work. This is the heart of Johns new model. In days gone by, a film maker would hand over the film to a distributor who would (or more often not) market the film aggressively.

Now that we are able to self distribute, we need to self market too. And that is a much bigger job than you think. Much much bigger. John estimates that this job represents around 50% of the work involved in a ‘successful business that makes and sells films’. I think he is right. 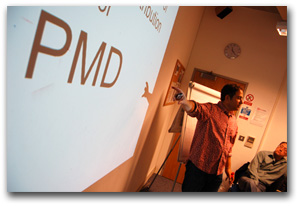 John calls the person who manages that position, the PMD, the ‘Producer Of Marketing And Distribution’, and he coined that phrase in order to create a crew position. He realised that unless this new position had a name, no-one would take responsibility for doing the job. And now the term PMD is coming up everywhere I go.

Truly, everyone in the room for this workshop was witnessing the inception of a brave and exciting new model for movie making success.

OK here’s the feedback from the weekend. 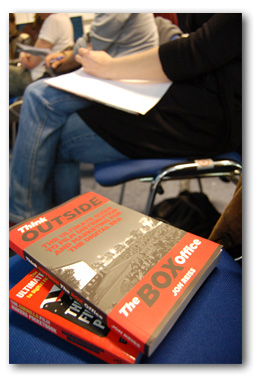 ‘Jon Reiss hits the nail on the head when it comes to the importance of marketing and distribution for independent film. In coining the term, 'Producer of Marketing and Distribution (PMD),' he identifies one of the key shortcomings and pitfalls of new filmmakers thinking on what it means to make a film. His fundamental point being, the production is only half the battle. Jon brings his passion and experience in independent film making into an insightful, thought-provoking presentation that is engaging on a level that resonates, educates and empowers film makers to be able to release their film to an audience in the way they intended.’
John Donkin, Sales Agent: Acquisitions and Marketing.

‘I'm an artist, interested in aesthetics, and 'business' scared me. Jon made it clear and actually interesting! It really demystified the whole area of social networking as a tool for filmmakers. Now I will start to market myself as a film artist, using these networking tools. I have an audience I can build on, and I can now expand it and develop it systematically and intelligently.’
Gillian McIver, Writer/ Filmmaker/ Cinematographer
www.gillianmciver.org

‘delivered much more than it promised, with a thorough and detailed distillation of marketing knowledge, experience, key skills and top tips. Sheri and Jon are very much from Chris' mould: totally unselfish and willing to share all their knowledge, mistakes and years of experience with anyone who needs it. John’s new ideas will doubtless take hold in the very near future, and I feel privileged to be ahead of the curve.’
Oli Lewington, Filmmaker/ Potential PMD
www.olilewington.co.uk 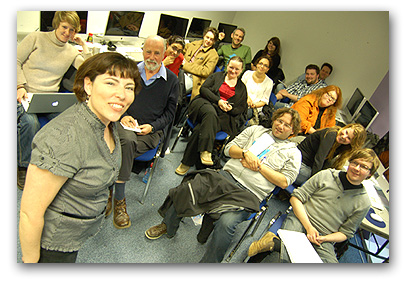 ‘Everything was interesting, involving and in plain English. Of all the film courses I have attended, this was by far the best. If you want to distribute a film, this course is a must. I have never learned more about film distribution and marketing.’
Larry Cowen, Filmmaker.
www.lambfilms.com

‘Sheri solidified so much of what was in my head – invaluable!’
Jennifer Hegarty, Filmmaker

‘It was a real eye opener into online marketing. It has changed the way I think about the film making process.’
Jules Rampton, Filmmaker.

Short Guide To Attending The Cannes Film Festival and Market For The First Time
The Guerilla Guide To Cannes!