By Chris Jones on July 11, 2010 in Gone Fishing, Screenwriters Festival 0 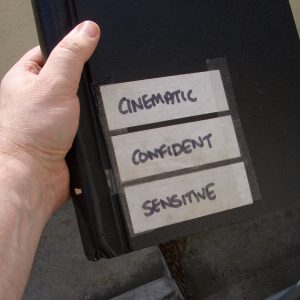 Write down three word that are the very essence of what you are attempting to achieve with your project, then filter ALL creative and practical decisions though those three words. This will give you ultra clear focus.

Being creative is a blessing and a curse. I have SO many ideas, many of which are very strong, that I kind of lose the plot. Quite literally!

So how do I keep myself on track?

Well I have a sneaky little tool that for me at least, works wonders. This little tool of course, only works once you have decided on a project, script, business idea, whatever it is your creative brain has ‘thunk’ up. It’s not rocket science but it works.

Here it is… Think of THREE words that fit the vision of what you are doing.

When I made Gone Fishing I did this, and it worked very effectively. I wrote my three words on the front of my screenplay so that every time I opened it, I was reminded of what I was doing… So here they are…

What did I mean by those words?

Cinematic – well that was a clear directive, but it also guided my choices when it came to things like shooting format, aspect ratio, lighting, framing and shot choices on-set, from  moment to moment.

Confident – this is not a statement of how I would behave on set, more a guide for the style in which the film would be written and shot. I didn’t want to be tricksy or use overly clever film making techniques. I wanted what was in front of the camera to ‘confidently tell the story’, and the writing in that story to be equally confident. In essence, to believe in the elements I had brought together, be it cast, crew, script and allow it to play out without too much Tony Scott style tricks etc.

Sensitive – it is a film about bereavement, as well as many other things. And the directive of ‘sensitive’ gave me creative boundaries in which to stay, bounce off and kick against, but NEVER transgress.

These three words played a significant role in keeping me on both creative AND budget / schedule targets, as well as keeping others such as the cast and crew, in line with a common vision. And it was most useful when under extreme pressure.

I also just used this technique on the London Screenwriters Festival, of which I am the creative director. I sat down and worked through the three words and came up with this… 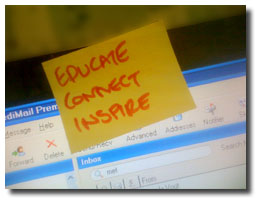 So what is the London Screenwriters’ Festival? It’s three days in central London with seventy screenwriting expert speakers which means if you come and take part you will…

Get educated by the best in the business…

Connect with film makers, agents, managers, broadcasters and a myriad other experts…

Be inspired by those who have gone before you and who are prepared to share their experiences… And if you have been you know how you will leave MASSIVELY INSPIRED.

See how the three little words act as a guide? All my choices for the festival are filtered through those three words.

I guess they are a bit like a ‘mission statement’, but for me they have greater flexibility and are not so prescriptive.

So what’s the question for you? What are the three little words for your project? Trust me, it’s worth spending 20 minutes thinking about it and jamming the answers on a sticky note above your computer. Go on, do it now.

Gone Fishing on Korean Fishing TV channel!
Gone Fishing Proposal - Final Proofs Before Printing
How To Write For Hollywood And Live In The UK: Podcast with Stuart Hazeldine
Pitching at the London Screenwriters' Festival
More Cash and Crewing!
Day three of the Rocketboy redraft and things are going very well
How To Distribute Your Film Yourself – Interview with Jon Reiss of Think Outside The Box Office