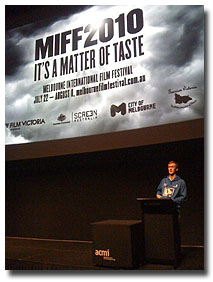 'Not sure if it sent these, I'm piggybacking my internet off a Chinese takeaway in Sydney…'

That's how this email just came to me… from James Fair who I reported on some months back. He was planning to shoot, edit and premiere a feature in 72 hours. And he just did it. I asked him to report on his learnings and here is what I got… Interesting for sure.

If you want to contact James, you can reach him here.

As promised, I said I would keep you posted on the outcome of the 72 Hour Movie ‘The Ballad of Des of Mo’, which we shot, edited and then screened in three days as part of the Melbourne International Film Festival. The good news is that it successfully screened to a full house and there was a great deal of energy and enthusiasm surrounding the process. I have spent my time since travelling along the Indian Pacific railway from Perth to Sydney, examining the successes and failures of the project.

My motivation to make a film in three days was to illustrate that we can work differently, using different organisational structures to achieve something that usually takes months in a mere 72 hours. It was not a manifesto for three-day filmmaking but an extreme example of how it could be different. In some ways I proved my point, because we achieved a great looking picture shot on RED One in multiple interior and exterior locations with 46 scenes and 17 actors. Other areas were less successful though, and without wanting to dampen our collective achievement (the team were incredible), I believe it is important to identify our shortcomings for the sake of improving our filmmaking.

The most obvious deviation from the plan was our responsibilities in production. Once the pressure mounted, roles quickly reverted to standard types on any typical film set, especially in the areas where I couldn’t be present, most notably the edit. This is not unusual, because it is human nature to resort to a system that is proven to work when faced with difficult situation. However, we were not there to test whether the traditional system works under pressure, we were there to see whether a different system could work better than the original. I cannot complain, because we were not faced with many options due to the convoluted workflow that we had to adopt with our budget. But this is certainly an area that I would like to examine further to find ways of seamlessly integrating editors with the on-set production team.

An extension of this weakness was the communication between the location team and all other areas of production. We got ourselves into a fixed mode of shooting scenes at rapid pace, regardless of whether we were bottlenecking data on the RED cards and drives, or whether we were impacting upon transport arrangements. In my defence, I think all filmmaking (72 hours or not) places greater emphasis upon shooting and getting the picture ‘in the can’, but in order for future models to work smoothly, the emphasis should be upon steadiness and consistency, not the feast or famine that was created with our shooting schedule. This lack of communication has a huge cost implication, because people suddenly start jumping around making last minute decisions – and in all walks of life, last minute decisions can be costly. I envisaged a well-gelled machine, turning over at regular intervals and data-dumping in fixed amounts to allow constant work in all areas. As it turned out, we had lulls and lapses followed by manic moments.

These criticisms may have people repeating the question “why do a feature in 72 hours? What are you trying to prove?”

What I set out to argue is that we should reassess the organisational structure of filmmaking in light of digital technology, as opposed to making digital a simple replacement for film. We could create new roles that mean faster and cheaper productions with less creative compromise by using models that use digital to it’s full potential. 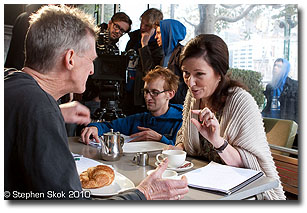 The real controversy of our project is that is wasn’t completed using 100 qualified technicians at the top of their game. Far from it. It was completed using 50 volunteers made up mostly of ‘inexperienced amateurs’. This goes to show just how far the specificity of film technology has dissolved. Everyone has the technology now, capable of shooting on camcorders and editing on personal computers. The ‘craft’ that took years to perfect is still present, but kids are starting at 12 or 15 with their skateboard movies and have racked up YEARS of experience by the time they are in their early twenties. They are building their own snorricams and steadicams. They are shooting slo-mo, high-res on DSLRs. They aren’t making excuses for the technology, they are kicking the shit out of it and seeing what it can and can’t do.

I believe that people are indulging in too much talk surrounding film and too little action. Opinion flies around the Internet, often derogatory, and very little is being done to truly experiment in our field. For example, I have read SO MUCH rubbish about the unreliability of RED cameras. Consider it all junk. We have thrown these cameras into long hours, lots of movement from location to location, different lighting conditions and quick shooting set-ups. ANYONE who says it can’t be done simply is not capable of using it properly. I agree that there are things it can’t do in relation to film – but that is the nature of technology. Film cameras can’t shoot things on silicon, so they are expensive. Work around it.

Which I believe brings me closer to the conclusion of my recent 72-hour adventure. As well as the team shooting and editing the movie transparently in three days, I have written a number of guest blogs alongside interviews for papers, television and radio. Most people express interest and good will at what we explore, whereas some critics want to pan our achievement as a gimmick dressed up as an academic exercise. The result remains the same – there is potential for change. You can either influence the direction of change or resist it completely; both are difficult. I believe I am demonstrating actions alongside the theory, because I think actions speak louder than words. In time I aim to deliver more formal conclusions to the 72 Hour Movie case studies, but for now, I feel pumped at the exciting potential of it all, and want to reach for the camera once more…

James is a lecturer in Film Technology at Staffordshire University and aims to present his 72 Hour Movie case study at the SXSW Festival in 2011. You can vote for him by following this link.