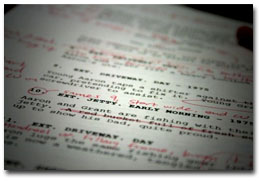 Well, we did get it down from 145 pages to 127 pages. But by that time, Judy and I had gotten ourselves so lost in the ‘wood for trees’ that we needed fresh eyes on the script.

It was time for some feedback on ‘Rocketboy’.

The script was sent off to about six close and trusted friends, all of whom read and feedback over the weekend.

I can’t tell you how tough it is to ask you good friends to rip your work apart, but gladly, all of them did their duty and much was learned from our side. I don’t want to go into too much detail about what was said, but there was general consensus that the story was simply overcomplicated for the demographic we are aiming for. It was really Eddie Hamilton who put his finger on it… ‘Strip it bare, down to the essentials that everyone loves, and you will have your movie…’ (that is a very simplified and paraphrased version of the quickening one hour Skype conference call Judy and I had with him).

And so the real work begins in earnest now. Draft 5, lean, mean focused and just a little whimsical.

On another note, Guy Rowland, a film maker and writer friend who also did a writing pass on both Gone Fishing and Rocketboy (some years ago) is now composing for movies and TV. He read the script, got all excited, and just wrote a ‘sketch’ music cue for the Rocket… because he can! You can hear that music cue below…

One Response to Rocketboy Draft Four is complete… and the feedback…