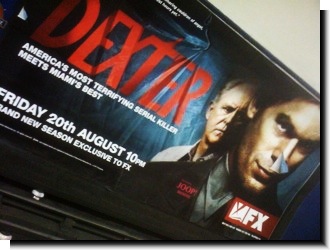 It’s always been the problem, and nothing has changed. When are these guys going to wake up in the 21st century? Of course this is a sweeping statement, not all distributors are the same… but it is largely true.

Over the weekend I saw that London was plastered with posters for the ‘new’ season of ‘Dexter’. I say new because I saw this season last summer. How? Well don’t ask. But suffice to say I am a fan of Dexter, and if you are going to ‘create demand’, you’d better not try to slow down or interrupt that supply. Unlike a decade ago where physical distribution could be controlled, if distributors and exhibitors attempt to stagger releases now, they will be dead in the water within days of release in one territory.

And here is the problem.

Distributors and exhibitors are STILL carving up the planet into territories, and then carving up rights in those territories to stagger releases. Unless we can move forward to ONE global release date, on ALL platforms, the industry will continue to stagnate and suffer ‘piracy’.

A typical problem for me happened last week. My girlfriend Lucia wanted to watch the new Twilight film at the cinema, but it was only showing at 3pm during the day. She works and she was busy with her sister at weekends (who also wanted to watch Twilight but had just had a baby). Having bought and read all the books, watched all the past films at the cinema, then bought them on DVD, imagine the frustration of not being able to see the film simply because the exhibitors had ‘blocked’ them. Demand but no supply. And guess what was suggested? Free of guilt I might add too. I am happy to say that through a stroke of luck, we did finally get to see it on the big screen as hoped.

The lesson? DO NOT create demand and then fail to supply that demand!

And so I look forward to one global release date, delivered via transparent and cost effective technologies that are open to both consumers and producers.

We are so nearly there…

How To Self Distribute A Film: Masterclass with Marcus Markou (Podcast)
The complete guide to UK film distribution for indie filmmakers
What ONE thing MUST you get right in your next film?
Demystifying Distribution: Real World New Distro Case Study Strategy and Tactics
Self Distribution for UK Filmmakers - what are the two KEY relationships you MUST nail?
How one filmmaker secured a UK distribution deal for their £30k horror movie WITH advance!...
Is social media useful to film makers or simply an empty promise and a distraction?
Top Tips For When Being Interviewed About Your Film