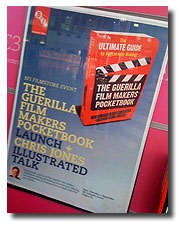 In Hollywood, movies are like hamburgers… That’s how co-author of The Guerilla Film Makers Pocketbook Andrew Zinnes put it last night to an enthusiastic group of film makers at the BFI. The BFI had organised this workshop in conjunction with their bookshop as a ‘book signing’ event, but it quickly developed into a Hollywood workshop as both Gen and Andrew were present (having just flown in from Hollywood for the 2 workshops – Documentary Film Making and Spec Scripts in Hollywood).

Andrew spoke both entertainingly and eloquently about working in LA, offering insight into the wildly different mindsets of European and West Cost American film makers. In Hollywood, movies are expensive products designed to make money and entertain. We all know this, but to hear it shamelessly vocalised, robustly defended and ultimately offered as a truly viable proposition was exhilarating. It’s not just something you could do one day, but something you can do right now. Heck you SHOULD do it right now, that is if you are love Hollywood cinema.

For me it was a terrific entre into Monday nights workshop on the spec script market and writing for Hollywood. Gen and Andrew will be speaking about their feature film, Absolute Angels, that they successfully sold to Warner Brothers and discussing exactly what happened to them through the process. It’s going to be an candid insight for sure.

This morning we trawled back through email to pull some of the top executives development notes for the film and we will be sharing those on Monday night too – it’s one thing hearing about ‘notes’ from studio execs, it’s another thing actually reading them in relation to a screenplay you have just read (remember as part of this workshop, we send you the actual spec script, optioned draft and final draft so you can read them in advance).

OK so there are ten seats left for the Monday night session and you can book here.

The phone rang, and from that moment, everything changed... PART 1
It’s only fitting that it’s American Independence Day
Has The Guerilla Filmmakers Handbook helped you make YOUR film? I want to hear from you...
Why we should all be embracing smaller film budgets and innovating
The Guerilla Filmmakers Handbooks have a new shiny website
12 ways to rewrite your British written spec script so it sells in Hollywood
Kickstarter campaign support for G'Fisher Kerry Finlayson… She needs your help!
Doc Workshop Success and final call the for Hollywood Spec Script Workshop, just £12.97