By Chris Jones on October 31, 2010 in Guest Blog, Screenwriters Festival 1 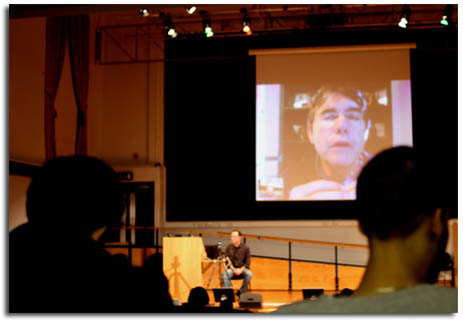 I followed the long documentary talks up with another Hollywood Hook Up with director and writer Stephen Gyllenhaal (father of Maggie and Jake) and he was speaking about writing and directing for TV in the US. Certainly if you want power in Hollywood then TV is the medium to be in where writers get much more control over the product made from their work.

Again, the American focus was on the professional craft of writing with Stephen focusing on writing from what you know. He said three-dimensional characters, going through situations that audience can relate to, is what makes great movies. I got a great understanding from him (and he’s very droll and funny and entertaining and extremely honest to listen to) of how writing from what you know is a kind of writing from the soul of yourself. (he didn’t quite phrase it like that but that’s what I got from it) and it reflected back what I’d heard in other sessions about a writers voice and writing in a way that is unique to you and your perspective on the universe. People are a great thing in his work and he advised not to get too caught up on the cameras and formats but to write things with people in.

He spoke about sharing his insights and it was certainly great to hear what he had to say, especially when he ranted a wee bit about the all too easy churning out of Hollywood explosion led films and he spoke about his Grassroots film project for which there are lots of videos on the website about how they made that and the process involved. Stephen is great to listen to, I’ve just taken a look at some clips and they are well worth watching. http://www.grassrootsthefilm.com/ Stephen would like you all to click the big buttons on the site to follow on facebook and twitter too!

A brief technical hitch with the skype hookup was very well handled and after Stephen went off to the editing room to get back to his work another hook up session started with Genevieve Joliffe in a very wonderful Witch disguise (I’m reliably informed that she’s more of a good witch of the East type than the cackling kind) but this screenwriter had to bow out as exhaustion took hold and there is still a huge day at the festival tomorrow.

Time to sleep.. thank goodness the clocks go back tonight, I could do with an extra hour. Tomorrow is going to be great and I want to be ready to get the most out of the last day of the festival!

Considering Documentary
The Final Countdown to the End of the Beginning!

One Response to Hollywood Hook Up with Stephen Gyllenhaal