By Chris Jones on October 31, 2010 in Guest Blog, Screenwriters Festival 0 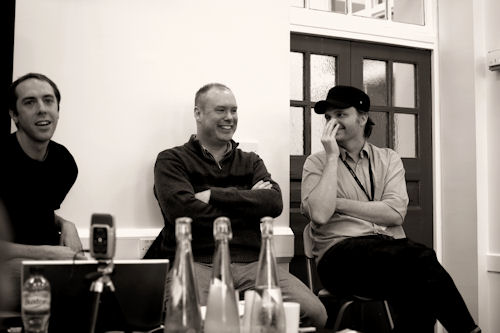 So it’s the final day of the very first London Screenwriters Festival. We’ve kind of witnessed something special starting here, I think. I feel privileged to be present for the beginnings of something incredible.

It’s absolutely flown by and I am glad that I paced myself a bit and didn’t try to do everything because I’m beginning to get a little overwhemed, in a good way though, as my brain is ticking over with thoughts about writing and films and living in this often crazy industry. It’s going to take time to absorb the sheer amount of information I’ve been given. And I haven’t even looked at the special Screenwriters Pocketbook yet!

I’m quite convinced that it’s all the information I’ve swallowed that is causing my brain to disorient me in the corridors.. I’m still a bit hopeless at working out what side of the quadrant I'm on, and am clinging to my map like a talisman. The lovely festival staff ae always there with a smile though and seem to be able to direct me to where I’m going without asking me where I’m going. How do they do that?

There’s another bundle of seminars still ahead for the afternoon and lots more to do before it’s over but overall I think the festival seems to have proved very popular and plans are already afoot to return it and make it even better next year. Yay!

Festival news has also proved quite popular with people who couldn’t attend but who have been tuning in to the #LSWF twitter hashtag and the festival blogs to keep abreast of seminars, hints and tips and just to get a feel for what’s going on. There’s been re-tweeting and facebook sharing amok and I’m glad the good vibe is spilling outwards to be shared into the wider writers community. Screenwriters’ festivals shouldn’t be a bubble, we are all part of a wide world of screenwriting and this festival acknowledges that fully and has reached outside itself as much as possible to share the love.

I believe that most of the speakers are nearly entirely intact after being repeatedly mobbed by delegates who love them… hey, we’re a friendly bunch, what can I say?! 😀

I have promised to bother one of the speakers again next year.. you know what he said?

How To Write For Hollywood And Live In The UK: Podcast with Stuart Hazeldine
‘Inception’, a screenwriters masterclass
It Begins By Beginning ~ #LondonSWF
Why pitching is SO much more than selling your film...
Dragons, Reapers and Guerilla Filmmaking: Turning Writer to Director With My First Short ‘...
What can you expect at the London Screenwriters' Festival?

Hollywood Hook Up with Stephen Gyllenhaal
Fuelled by People