By Chris Jones on November 13, 2010 in Screenwriters Festival 0 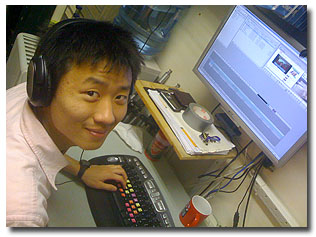 Those of you who attended the festival will have seen Chris Huang running around like crazy, managing the four camera and sound teams who were filming the sessions. He was clearly a glutton for punishment as on the final day he asked if he could edit them too. As we filmed around 40 sessions, each an hour and a half long, that’s over 100 hours of footage!

For the last week, computers have been digitizing the terabytes of data we shot and recorded – Chris commented that the last week of his life was spent largely watching little blue lines go from zero to one hundred percent… very slowly! If you have been there yourself, you will know the pain. For me it’s been a reminder that even in 2010, with super fast computers, moving and rendering terrabytes of data is still painfully slow.

The good news is that  Chris began work on the edit yesterday. We will release a few of these sessions into the public domain in due course, but the vast majority will remain inside a network for LSF delegates.

Right now I have just completed the export of the first session, 90 minutes in HD, rendered to a Quicktime before uploading… and now it’s time for me to watch the little blue line of death!

How Actors Can Radically Improve YOUR Script
Working with Actors, interview with Olivia Williams
Pitching at the London Screenwriters' Festival
Meet Edgar Wright in this fascinating and candid one hour interview about filmmaking, writ...
The power of disconnecting from reality to reconnect with the dream
Why pitching is SO much more than selling your film...
Camaraderie, focus and chemical addiction – are you an addict?
A day of rememberance for a time captured on film…