By Chris Jones on December 4, 2010 in Awards, Exam, Magazine Articles 0 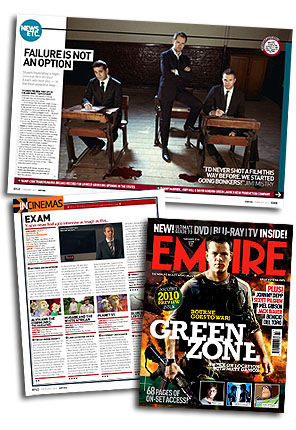 You might think our eligibility cycle would be over by now… but you'd be wrong. There is ONE MORE AWARD CEREMONY to go and snagging a nomination would be the perfect way to end our run.

Empire Magazine has been a big supporter of our little film, and the Empire Awards 2011 are NOW OPEN for voting! YOU can make a difference by voting for EXAM, in the Best British Film category especially but also in Best Thriller and any other category you like (though Best Comedy might not be appreciated).

It'll take 30 seconds of your life, so do CLICK HERE:

And please forward this to your friends/post up to your status updates too. Thanks for your support and Happy Christmas!

How To Write For Hollywood And Live In The UK: Podcast with Stuart Hazeldine
Video Postcard from the 50 Kisses Premiere
EXAM: Meet the filmmakers, read the screenplay...
Oscar winning Producer Gareth Unwin and Oscar winning writer David Seidler: The Kings Spee...
Meet The Nativity Wins 'Best Festival' Film at 22nd Jerusalem Awards at BAFTA
A Masterclass In Microbudget Film Making – Interview with ‘Paranormal Activity’ writer and director Oren Peli
What use is a Spam Filter?