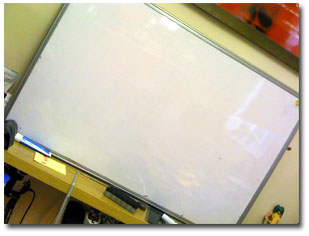 As 2010 draws to a close, it’s time to consider 2011. What will 2011 hold for me, and for you? Around this time of year, as most people start sloping off into endless Xmas parties and shindigs, I like to hunker down and consider the next year. And the next big project… That always begins by considering what happened in the last 12 months. And I have got to say, 2010 has been both busy and productive for me.

We began 2010 by writing and publishing the Guerilla Film Makers Pocketbook, off the back of which we launched our web based multicamera TV show, The Production Office (and we just passed 1,000,000 viewer minuutes!). We also delved deep into a massive redraft of Rocketboy and rounded off by running the London Sceenwriters’ Festival in October. And we have one more BIG announcement that may happen in December, or in the first few weeks on 2011. More on that in due course.

But honestly, we needed to do have done more.

And so this week I have been plotting with Judy and David.

And in 2011 we are determined to make a feature film.

This will be my fourth feature film. But rather than putting all our eggs into one basket, we are spreading the ‘bets’. 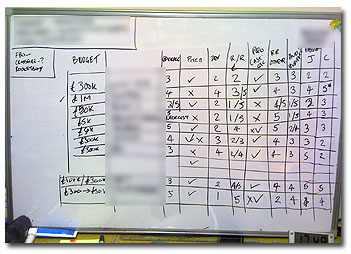 So last Friday we cleared off the white board and wrote down EVERY single project we had, even down to the ones that were simply a great one line pitch. We then started rating them in terms of budget, audience connection, project development, personal passion etc., creating a shortlist of ten or so. We then created a detailed chart, adding more metrics such as ‘package-ability’ (can we create an attractive proposal?), pitch-abiltiy, risk to reward ratio (how much effort did we want to put in balanced with how much we would get back?), cast-ability etc. Finally we rated them on personal passion too.

The results were fascinating and illuminating. For me, by doing this, the process of making tough choices was made very easy.

For obvious reasons, we are keeping the exact results a secret right now, but I can reveal that we have committed to a model that includes developing five projects…

1. A micro budget horror (sub £5k) that is innovative in both story and execution. We will develop the project and execute it next year (should a bigger project not take off).

2. Two low budget films (around £50k) both of which we will create killer campaigns for before taking to Cannes and seeking investment. We will not develop screenplays for these films until we feel confident that momentum is sufficient to warrant the work, but we will have a package that we can present to interested parties.

3. Two ‘funded films’ (which we called ‘projects over £300k’, which could also be several £million depending on finance and cast). One of these is ‘Rocketboy’, for which we will do a further script re-draft in January. The other is a ‘Twilight’ audience horror film called ‘Emo’, a project I have mentioned on the blog before. We will be developing artwork and a detailed treatment for this.

The process we undertook was to help us avoid distraction from all those other ‘great ideas and projects’. They may be great and we will probably revisit them in the future, but right now we need to focus on a business plan for 2011 that includes the most viable projects. Not the projects that we simply want to make.

I believe that creative people are easily distracted by great ideas. I know I am.

And in these days of hyper connection through social media, access to near limitless knowledge and so many free web tools and cheap technology, EVERYTHING seems possible. And so often, we try and do EVERYTHING, which often leads nowhere.

And success lies in project completion.

Fundamentally, there are no right answers. And all your ideas are probably good, perhaps even great. But success will lie in your ability to FULLY execute a single idea brilliantly and then connect that ‘product’ with the people who will lead to your further success, be it an agent, an audience, a sale, a commission, a broadcaster etc…

Good luck, and be REALLY tough on yourself and your ideas.

What is happening now is less interesting than what may happen next
Why complaining to your friends will get you nowhere fast...
Top 16 quotes from Robert McKee for screenwriters, storytellers and filmmakers
What did our delegates say about LSF 2012?
Whenever you feel like giving up, remember... Victory is close
How to Turn Your Followers into Doers... How I did it in my Fantasy Epic by Kate Madison

Top Tips For Dealing With Film And Media Related Press
Need inspiration for your next film? Want some script coaching? The 21st Century Screenplay by Linda Aronson

3 Responses to How Do You Create Success For Your Film Making Career In 2011?