By means of a little Christmas spirit, I thought I would share this film with you, made by David Reynolds. It was made as an entrant for the Pepsi film makers challenge. It really touched me when I saw it as it captured everything I love and hate about film making. And so I asked David to share his experiences making it. 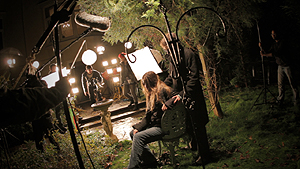 The short is a two minute piece about the trials and tribulations of guerrilla filmmaking. It was shot in two weeks by myself and my housemates / film company Realm Pictures on a budget of about £130 and some favours! It was lit almost exclusively with £10 worklights (lots of them) from ALDI, shot on a Canon 7D and all the moves were performed on a homemade dolly! The most expensive thing we bought was the harness to get me into the oak tree (you will see…).

The story is told from the heart – and from three years experience making a 50 minute zombie action movie for a budget of £10,000 (www.zomblies.com). I hope it resonates with filmmakers everywhere – we are really proud of it.

We shot on Canon 7D in the marvel Ssuperflat picture style. There are various picture styles that can be downloaded that govern how the 7D deals with the chip information before compressing it – the Superflat style is a controversial one that preserves as much shadow and highlight detail as possible, theoretically giving you more room to play with grading in post. The downsides are that sometimes skin tones look a bit plasticy and it encourages people to shoot without any thought to final look, just assuming they can decide later, which is very unwise. The blog where they are all hosted, along with the newer (less aggressive) versions is here: http://marvelsfilm.wordpress.com/
– some people hate it but I love the dynamic range boost. Most DEFINITELY keep highlight tone priority turned OFF to avoid horrible vertical lies in the noise (not good for grading!) 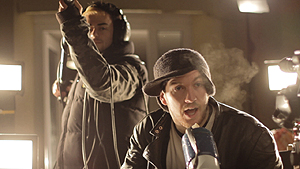 In the edit, the footage was never converted, a point of many arguments with many Mac users and people who read certain blogs. MP4+CS5+PC is great and requires no rendering or extra disk space – straight from camera (MP4 file) into Premiere CS5 and then import project into After Effects CS5, all on a PC. I graded with Magic Bullet Looks inside AE, lots of vignette and two-tone palettes to add to the romanticised feel. Lens wise, we use a 24-70 L as a workhorse, a 50mm 1.4 EF for portraits and bokeh and a wonderfully quirky little 15mm USM Fisheye for comical inserts!

We planned the scenes around strong key images – and tried to give each one a colour palette to match. You will notice lots of deep golds and reds accompanying the vignettes, then the odd blue or green to move around the colour wheel. Another useful lesson learned – the LED light on the iPhone 4 is great for backlighting the steam on hot cups of coffee! Also, if you are using 12kw of lighting in your house DO NOT OFFER TO MAKE A BREW because you will blow the house fuse as a kettle is usually 3kw!

I recently had the honour of meeting Spielberg when he was shooting in our stomping ground of Dartmoor. Following that I signed up as an extra to watch him and Kaminski work close up. Honestly the best film school you can imagine (I dropped out of ‘real’ film school….) Kaminski backlights EVERYTHING which is a style went for here and the 7D drinks it up. I am learning that it is all about separating levels of depth – about making the 2D look more like 3D. We do that with backlighting, complementary colours in foreground and background, camera moves, shallow depth of field, steam/smoke and modeling light. 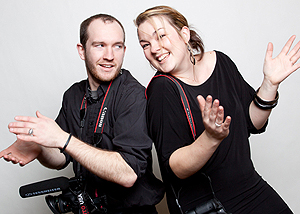 So please vote for us – It can be voted for every day (once per social network account) on the Pepsi website, and every vote will enter the vote into a draw for a daily £100 Amazon voucher.

Thanks for sharing this film and story Dave, I personally found it inspiring! There is more of Dave’s work on his Vimeo channel here.

And remember, please vote for the film here…
http://www.maxitlegends.com/#/gallery/?vid=pNNEwFqQCB8

Dragons, Reapers and Guerilla Filmmaking: Turning Writer to Director With My First Short ‘...
How one filmmaker secured a UK distribution deal for their £30k horror movie WITH advance!...
How remarkable is your project?
Top Ten Quotes for creatives by Steve Jobs
Top Quotes from spectacle-meister Cecil B. Demille
Writing For The Digital Film Makers Age, with Phil Parker, free 1 hour Seminar
Why I chose Jimdo.com for my static website for Living Spirit Pictures

One Response to Why do we make films? Watch this short film and feel the magic… (switch to 720P and watch full screen!)