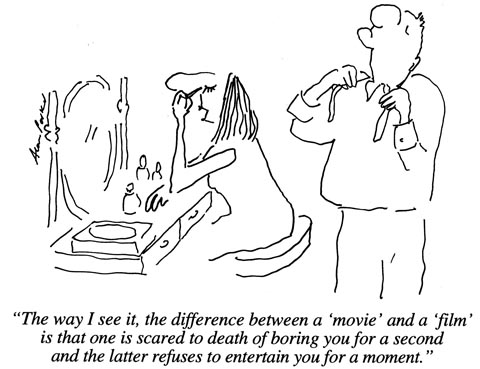 Have you made a ‘film’ or a ‘movie’? More importantly, are you seeking ‘funding’ or ‘financing’?

Some time ago I blogged about this cartoon by Alan Parker. I love it because it captures the essence of why I believe state funding for film is not always a good thing, how it fosters a sense that film making is an art and often not bound by commercial sensibilities.

We have been working on our film and the question always comes up… ‘where is the money going to come from?’ No surprise there.

And I know that whenever I speak with filmmakers at events, that same question always comes up too –  ‘where is the money?’

Actually, it often comes up as… ‘how can I get funding?’

BUT… I am rarely asked ‘how can I get financed?’

Isn’t that the same thing?

It’s a subtle difference, a bit like a ‘film’ and a ‘movie’.

For me the dangling carrot of ‘funding’ from some kind of body, be it a Quango, an institute or other ‘fund’ set aside for the arts, is really bad news for film makers.

I believe that if I want to have a career in film, I must sustain myself through great ideas, great execution and connection to audiences, I must produce stuff, sell it, and make a profit… and then repeat that process. And that’s why I need financing from key partners and not funding from a Quango.

OK so here are my pros and cons of funding versus financing.

Funding is better than financing because…

Financing is better than funding because…

(if you have any more pros or cons, do add them)

For me the great distinction is that when seeking financing, I am in control of my destiny. I can set up ten meetings a day, I can make any deal or offer I want to make, there are no predefined rules, only principles that have proven to work.

I believe that people involved in ‘funding’ organisations mean well. I really do. But I also believe that ‘funding’ skews the playing field, offers false hope and this has created a generation of film makers in the UK who have been slowed down in their growth because of it. Of course a handful of lucky ones have enjoyed huge acceleration (skewing the field yet further).

So the question for you and for me, the challenge even, is… are we going to ask, cap in hand, for help OR are we going to offer great opportunities that ACTIVELY attract investment?

Are we going to run a businesses where sales MUST outweigh costs, are we going to approach investors with killer proposals for commercially viable projects, or are we going to rely on a small (and getting smaller) group of well meaning people who will NEVER pay the price if our films do not perform?

It’s time break free of the ‘funding’ dangling carrot, to embrace freedom and commit to making a career in film that will last a lifetime, not the duration of a paltry handout.

I know for me at least, I am committed to breaking all my past barriers and I really hope that I see you my journey, ideally just ahead of me to remind me to keep up with YOUR pace…!

PS – If you have any Pros and Cons to add to this list, please add them.

Networking With Film Makers… how do you do it?
Catherine Hardwicke Genesis: How she wrote and directed her first film that led to 'Twilig...
The phone rang, and from that moment, everything changed... PART 2
Ken Loach, top 13 quotes for filmmakers and screenwriters
Top Ten Alfred Hitchcock quotes for writers and filmmakers
How to get your film funded using the EIS, SEIS and UK film tax credit, podcast with Ivan ...

Create a timeline for your projects
Short Films on the film festival circuit, a view from one film maker… Chasing Cotards

6 Responses to A guide to film finance and funding – are you going to get funded or financed?