NOTE – If you watch the film above, please make it FULL SCREEN

On the Production Office LIVE last Thursday, I did an unplanned interview with Aussie film maker Mark Deere. It was to highlight a new feature in Vimeo, uploading feature length work. I so asked Mark to share his thoughts on the blog…

‘About a fortnight ago, it was announced that feature-length movies can now be uploaded to Vimeo. Having recently completed work on my latest no-budget feature, ‘The Least Damnedest Thing’, this was great news for me, as it seemed like the perfect way for me to get my movie seen. Instead of having to wait to get into film festivals (and spend a lot of money in the process), I can get immediate feedback from a world-wide audience! I’m not sure if it’s officially the first feature film to be uploaded to Vimeo, but it is definitely one of the first.

Less than five minutes after ticking the box to make the movie ‘public’, I got a message from Chris, asking if I was going to be watching Episode 1 of Season 2 of The Production Office. I said, “Of course,” (note from Chris, this meant Mark getting up at 5am in Australia) and told him that I’d just uploaded my movie. Chris offered to interview me on the show, so live viewers of The Production Office were literally the first people to find out about The Least Damnedest Thing being available to watch for free on Vimeo. In less than 24 hours, it has been viewed 143 times.

I attended Chris’ Guerrilla Filmmakers Masterclass in Australia in 2009 (Mark actually features in the video here), having just completed shooting on The Least Damnedest Thing, and learned so much I wish I’d known before. It was hard getting through 18 months of post-production knowing I’d have to wait until my next production to implement all of these lessons. Although The Least Damnedest Thing isn’t a perfect film, I’m excited about getting feedback that I can use to keep making better movies.

Anybody who has made a movie knows that one of the hardest things is finding an audience for it. Even though I won’t make any money from giving my movie away for free online, I feel like this is such a great opportunity to have my movie seen and hopefully find an audience who want to watch movies like mine.

Thanks to everyone who watches The Least Damnedest Thing, and a big thank you to Chris for being the first to get the word out about it! 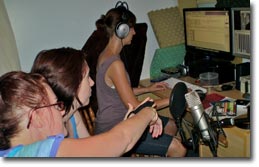 Thanks Mark. And WOW! Guys. You replaced ALL the dialogue and added your own foley, atmospheres and SFX. That is a MASSIVE job and you did it sooooo well. Congrats.

How amazing is that you can share a feature length movie, streaming live, in ‘HD’? Blimey! If you watch the film, please leave some feedback here and I will bounce it back to Mark. They also have a Facebook fanpage here.

How You Can Make Money With Your No-to-Lo Micro-Budget Film
My First Lessons In Guerilla Filmmaking Transmedia Style! By Kristi Barnett
After years working in the real world finding my life rushing past me faster and faster, i...
Exclusive Interview with Christopher Nolan and Emma Thomas from our Guerilla Film Makers A...
Guerilla Film Makers Masterclass Alumni Rhys Davies: Micro Budget Horror Case Study, Relea...
Short Films on the film festival circuit, a view from one film maker... Chasing Cotards