The ‘Gone Fishing’ online Workshop is still on sale, reduced from £69.99 to just £37.99. Loads of film makers signed up after Christmas, to grab this bargain and to energize 2011 right from the get go. But one film maker stood out as someone who really embraced the workshop. His name is Steve Bookbinder and he completed the online workshop a couple of weeks ago. He felt so inspired and focussed after the workshop, he immediately began work on his film (www.HappyBirthdayMovie.net) and just two weeks later, he is nearly fully funded! Here’s what he said about the workshop…

‘It was at the first London Screenwriters’ Festival last year that I came across film maker, Chris Jones.  I went to his session called, ‘How to win an Oscar’.  Even the title suggested a tangible aim, a real objective you could work towards.

At the end of the seminar, we watched Chris’s short film, Gone Fishing.  Anyone who’s tried to actually make a short film, as opposed to thinking about making one, will know it’s not easy. But this film really stood out.  The highest production values, superb photography and great performances are there in abundance, but it’s the story which draws you in all the way.

Festival over, pen poised, I launched into the online course.  What I didn’t expect was such a thorough dissection of the making of a movie. From raising funds and early script drafts to crewing and casting; from storyboards to second unit, and on to editing and grading – every stage is examined with the help of those who did it: Director, DP, editor, colourist and so on.

But the really unique thing about this masterclass is Chris. What do I mean by that? I don’t think I’ve been through a film-making course before that has demonstrated this degree of honesty.

We film makers are an insecure bunch, not surprisingly, given the competitive and saturated industry we work in. That means we usually keep our mistakes or lessons close to our chest, preferring to share the great successes instead. Don’t get me wrong.  It’s great to hear what worked, but often times it’s our mistakes that we remember and learn the most from.

A good example of this in the seminar is the sharing of drafts one and two of the Gone Fishing script. A lot of writers and directors would not want to share these, let alone reveal them in an online course. But Chris’ willingness to do so allows a film maker to see the script journey, to appreciate how cutting a scene, clarifying a plot point or tightening some dialogue makes the story stronger or a character more compelling.

Chris’s approach throughout the course is to be real, to tell it how it is.  What was challenging, what was unexpected, what at first didn’t work?  There were times when I felt I was making the film with Chris, and experiencing the process with his crew. To be allowed to share those lessons from someone else’s experience is infinitely more valuable that a pile of script writing or production text books.

This openness was then evident again in part two of the course, which was devoted to the marketing of the film and navigating the festival circuit. This was something I knew very little about, and yet is clearly as important as the film itself.  Negotiating a path through the maze of film festivals and awards has to be part of a film maker’s armoury now. And again, I felt as if I was going to Rhode Island or the Sedona Film Festival with Chris, not least because of the filmed webisodes attached as extra resources. How cool to have a video diary from the actual festival, complementing the analysis side of the seminar!

But the wonderful thing about this masterclass is that you really feel, ‘I could do this too!’ There’s a massive dose of optimism and confidence running through it. That’s really significant in an industry where it’s all too easy to say, ‘Oh well, it was James Cameron or Peter Jackson’ – they can do anything.’

No, this is a guy just like you and me who dared to make the dream a reality. And that dream has good days and bad days – and that’s okay.  You can get through it and make it happen.

The Gone Fishing Seminar does so much more than give you the tools and share some great insights and tips, even though it does these in shed loads. Crucially, it will give you the belief that YOU can do it too. You can actually embark on the journey to make a great film.

This masterclass has made me run out of excuses to make my film.  I now have the tools and the tips, the do’s and the don’ts.  But much more than that, it’s inspired me to actually go and do it.  It’s given me something no other seminar course has – the real belief that I can make a world class film too.  We’re shooting next month!

Blimey Steve! I did work hard to deliver an extraordinary experience and I am delighted that you ‘got it’. I am sure your film will be a wild rollercoaster now that your sights are raised higher than ever.

Remember Steve only started raising funds a few weeks ago and he is two thirds of the way to his £10k budget. More on his film here.

OK so if you want to take the seminar, you should know that it is 100% online and you get a lifetime pass, so you can do it home and retake it, over and over (something Danny Lacey told me he did before he made his film ‘Love Like Hers’ – he also told me that he would leave it playing in the background as he worked).

You can sign up
with this link here here…

And here is a breakdown of the complete workshop. 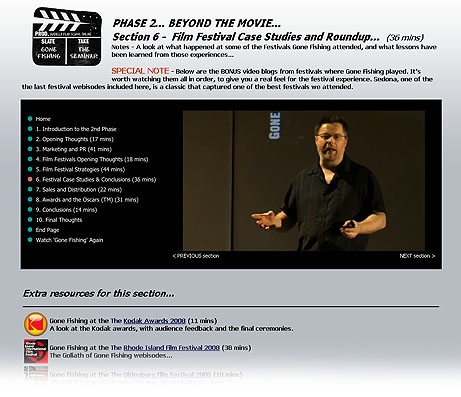 More Cash and Crewing!
Gone Fishing Update
Stunt Co-ordinator gets onboard
What's the secret to getting through a huge script on limited resources?
The Top FIVE Steps To Getting Your Film Funded
Success is more perspiration than inspiration, but sometimes it’s the inspiration that fuels the perspiration… A masterclass in being a writer (and creative person).
And another email from Hollywood! This time from Gen… and a guest blog about making it to tinsel town.