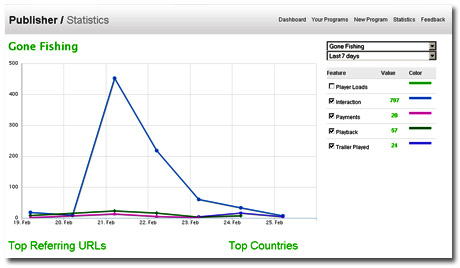 So how have things played out after my first week with DynamoPlayer?

As far as ‘Gone Fishing’, my Oscars shortlisted film goes, I have some actual statistics now. Yes these are skewed because of my blog entry last Monday, but nonetheless, they are real figures.

Since Feb 19th when I actually built the site at www.buygonefishing.com, 797 people have clicked on the play button, which resulted in 20 sales at $1.99. Those 20 sales resulted in 57 ‘plays’ (which represents plays, replays, scrubbing up and down the timeline and extra feature plays) Note the trailer loads were not working for the first few days until the Dynamo guys fixed it.

At 56%, visitors were mainly from the UK, followed by the USA at 26% and then tailing off to 20 or so other countries, lead by Australia at 3%.

Not startling figures (as a side note, I don’t have any figures from iTunes about Gone Fishing after one year of sales, but I am informed from a producer friend who has a similar film on iTunes that he has sold less than 1,000 units in a year – if and when Shorts International actually report, I will share those numbers with you).

So is DynamoPlayer a Gamechanger?

I still feel it is.

There has been much chatter on Twitter, blogs and comments posted on the web about my campaign, and over the weekend I will do an analysis of this feedback. But for now, I just wanted to explain why initial thoughts.

First, I remain in control. ALL of that traffic to my site was driven there by me or by referring services or people. At a deep core level though, it was MY work that resulted in the traffic and sales.

Second, now it is built, aside from driving traffic, I don’t need to do anything.

Third, I can harvest emails from buyers and build my base. I can even upsell DVDs. No-one controls that data aside from me.

And most important, Dynamo is not my only shop front.

This technology is still very new and people may resist it at first. And there are some major barriers to overcome too, such as the mess Apple is creating for everyone by blocking content like this to iPhone / iPad (and recent revelations about Apple look like they are just going to make things even worse – Thanks for the link Alex).

But the really big thing to remember is this, my film isn’t new.

It’s played at over 150 festivals. It’s been on TV in heaps of countries. It’s played on airlines. And I have sold 1,500 DVDs and BluRays from my homepage over the last 2 years. For Gone Fishing, DynamoPlayer serves as a test of concept and represents the end of the ‘long-tail’ of its sales cycle. (though we do have a few tricks up our sleeve just yet, so watch this space ;-))

Both my film and much of what is appearing on DynamoPlayer is material that has been made with a traditional sales cycle in mind.

We are still looking at DynamoPlayer as a way to repackage and resell films that have been made primarily for old sales models (TV, DVD, festivals etc.).

It’s early days… but I remain as excited as ever.

We have all the tools we need. The kit, the knowledge and the power to distribute globally.

Now we need to get creative about building a great movie, but also a great proposition that makes our visitors REALLY WANT to RENT or BUY. We can’t just offer something interesting, it needs to be compelling and MUST HAVE.

If you havent seen it, do check out our page for 'Gone Fishing' at www.buygonefishing.com

How one filmmaker secured a UK distribution deal for their £30k horror movie WITH advance!...
Worst performance at US box office in 10 years... what does this REALLY mean for filmmaker...
How to make a DCP (Digital Cinema Package) on your own computer
HMV and Blockbuster deserved to fail
What ONE thing MUST you get right in your next film?
Dynamo Player shuts down.
Are you ‘selling’ your film or ‘offering’ it? DynamoPlayer, real world case study…
My First Visit To The Biggest Short Film Festival and Market In The World, Clermont Ferrand with Mazin Power

3 Responses to Selling Your Film From Your Webpage With DynamoPlayer… How Did We Do In Our First Week?