By Chris Jones on April 27, 2011 in Guerilla Film Makers Masterclass 0 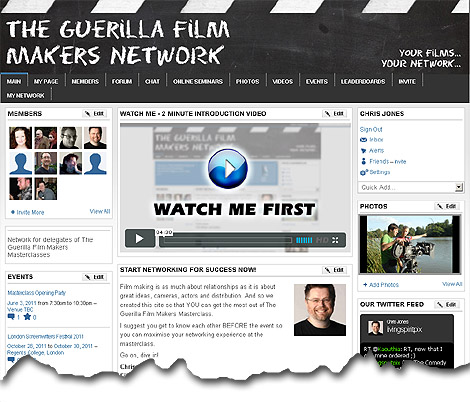 After the amazing success of the delegate network for the London Screenwriters Festival, I have decided to build a network for delegates of the Guerilla Film Makers Masterclass event that I am running on June 4th and 5th.

It’s kind of like Facebook but only for the delegates of the Masterclass. It’s a way for all the film makers who sign up to the workshop, to share their contacts, network and collaborate both before and after the two day event.

What we found at the LSF is that about half the delegates really used the network prior to coming to the event, to get to know each other, even start collaborating, so that when the big day actually arrived, it was like meeting up with old friends. And film making, of all creative businesses, is one of collaboration.

It’s so exciting that tools like this are so accessible now as it brings creative people together in a way that really helps move projects closer to production.

OK, if you have signed up the masterclass you will be getting an invite soon.

And there are still seats left at the early bird discounted price of £60 at www.guerillamasterclass.com – the earlybird ends at the end of the month so hurry if you want to come. Remember, it’s TWO very full days that will take you on the journey of making your first feature film, selling it and beyond.

It’s also rebuilt for 2010, hence the new title Rise Of The Micro Crew.

And feedback from past delegates at http://www.guerillamasterclass.com/delegate-feedback/

Five Important Lessons that I used on my feature film 'The Journey'
Guerilla Film Makers Masterclass Alumni Rhys Davies: Micro Budget Horror Case Study, Relea...
Well that happened...! Blood, guts and glory at Guerilla Film Masterclass
What's the secret to getting through a huge script on limited resources?
Shooting right now in Greece... A Guerilla Masterclass Success Story
Why we should all be embracing smaller film budgets and innovating
The Top FIVE Steps To Getting Your Film Funded
Micro Budget Film Making Law Number 8… Get A Single Shooting Location To Fulfill Multiple Story Locations