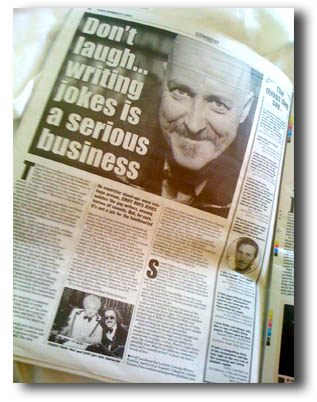 At the London Comedy Writers Festival, we are asking our delegates to tell us, in advance, which sessions they want to attend so that we can make sure the most popular sessions are in the biggest rooms. And the results have been fascinating.

Aside from the Keynote opening session with comedy legend Griff Rhys Jones (which we got a full page with in the Sunday Express today, pictured here), which sessions made the top five?

So in reverse order, fifth most popular session…

5. PRODUCED! Writing the Successful Comedy Spec Script
So you have the great idea, you may have even written your screenplay, but how do you get your work into the hands of the people who can greenlight your project? What are they looking for? What will make your work stand out? What key relationships should you foster? Why do some projects get optioned where others don’t? Your chance to get the inside know how from the people at the top who make the decisions. 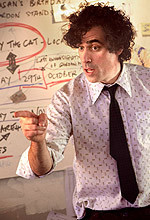 4. Acting Funny : Writing Great Comedy That Actors Want To Perform
Your script depends on actors. It doesn’t come to life until actors perform it, and the more you know about the process the better you can write scripts that appeal to them. Which can make all the difference to getting your script made at all. Going to a broadcaster or a producer with a well-known actor attached to your project can whisk your script from the bottom of their slush pile to the top of their development agenda.

A top actor who’s passionate about your script can transform it in more ways than one. So, you need to know how actors read a script, what they look for, and what makes them want to play the characters you create.
And when those actors are JESSICA HYNES, who has a great track record as a writer herself, as well as being one of Britain’s fastest rising actors, and STEPHEN MANGAN, who’s been involved in some of the hottest UK comedy projects in recent years, you’ve got an unmissable opportunity to find out everything you should know about writing for the best actors. 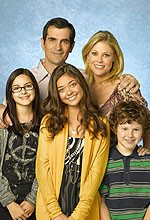 3. Anatomy of a Sitcom
A successful sitcom is the holy grail for broadcasters. But what exactly is a sitcom? How does it work? Like so many other aspects of writing, being clear about your genre is vital.

Get it straight: definitions, dynamics, process, golden rules (and when to break them).

And coming in first… 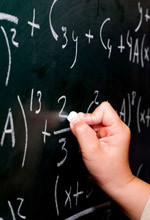 1. What They Don’t Teach You At Comedy Writing School with Robert Popper
Robert Popper has been involved, in one way or another, with hugely successful projects like ‘Spaced’, ‘Peep Show’, ‘The IT Crowd’, ‘South Park’, ‘Black Books’, ‘Inbetweeners’, ‘Look Around You’, ‘Bo’ Selecta’, and now his own new sitcom, ’Friday Night Dinner’.

But how did he get started in the business, and what steps did he take to develop a career that’s had such an impact on contemporary British comedy? His story is a great example of the ways that new writers can be creative about getting themselves noticed. When Robert was starting out, what was in the gold embossed envelopes he sent to Steve Coogan? How did he go from being rejected by sceptical publishers to being the author of a series of books that have sold 300,000 copies? What did it take for him to set up his own production company from scratch?

We all begin as outsiders, and this session will show you how the best person to help you kick-start your career is you.

And remember, we will be filming as many sessions as our speakers will agree to, so you should be able to catch pretty much every session we run.

DISCOUNT – And you can get special discount by using the discount code CHRISJONES when signing up below, or on the main site here.

Short Films on the film festival circuit, a view from one film maker... Chasing Cotards
Using video blogs to share your film experience... Rhode Island from the archives
How Getting Involved In A Community Film Festival Can Inspire You As A Film Maker
Watch the short film that catapulted director of Blade Runner 2, Denis Villeneuve, to the ...
The number ONE reason I encourage filmmakers to go to film festivals
Canon 5D MkII versus Film in the real world… the result?
Top Ten Tips For Making A Contract, a Film Makers and Producers Guide
FREE online seminar, ‘Making Web Based Comedy and Films’ with the Misery Bear Team