By Chris Jones on April 20, 2011 in Feedback, Festivals, Screenwriters Festival 0 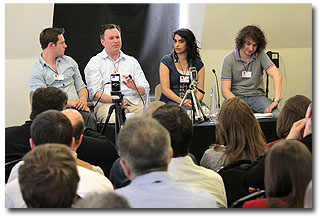 And finally, to wrap up the Comedy Writers Festival, here is the feedback from our illustrious speakers. We are all rather delighted the discover that our speakers enjoyed the festival just as much as our delegates (delegate feedback here).

Remember the London Screenwriters Festival (October) is now selling tickets too, you can get yours here.

‘That interaction is what makes a festival like this so vital for writers. I met some great people and was genuinely engaged by the whole event. Can I come back please?’
DECLAN LOWNEY – Director (‘Father Ted’, ‘Little Britain’)

'Writing is a solitary business and I think it’s essential that writers can find a forum where they can discuss every aspect of their creative profession and get an understanding of how comedy writing works as an industry. For my own part of course it’s invaluable to connect with it at a grass roots level to meet with and listen to writers at all levels in the profession.’
JOHN GRIFFIN – Producer (‘Shameless’, ‘Skins’)

‘‘The London Comedy Writers' Festival was, bar none, the best run, best organised and best attended writers' fest I've ever seen. Enthusiasm, camaraderie and a sense that people were actually *getting somewhere because they were here* made all the difference."
KAREN KRIZANOVICH – Presenter, Writer and Journalist

‘Without the 'writers room' apprenticeships of the American TV industry, it's vital that upcoming British talent find other opportunities to hone their craft and grasp as much practical, real-world advice as possible. Events like this festival offer a major step on that journey’
ANDREW ELLARD – Writer, Director

‘Events such as these are invaluable for freelancers. It gets everyone out of the writing bubble and fosters a community of like minded creatives. Everyone should do this festival whether a newbie or professional. It's informative, inspirational and educational’
JONATHAN NEWMAN – Director, Writer (‘Swinging With The Finkles’, ‘Foster’)

‘a great opportunity to chat to writers about the really dirty secret about sending a script in – make it as funny as possible and don't faff about with periphera. I may not quite have phrased it like that on the day of course…’
DAVID TYLER – Producer | Pozzitive Television

‘The highlight, for me was Griff Rhys Jones’s address. When he compared comedy writing with mining for gold; ie that miners have to wade through 200 tons of rubbish to find one nugget of the right stuff, I realised that I am not alone in finding writing incredibly hard. It really is 1% inspiration and 99% perspiration. I am inspired to write on, and can’t wait for the Screenwriters Festival in October for more of the same.”
JANICE DAY – Writer

'I had a blast at the London Comedy Writer's Festival. Brilliantly run. Great events. It's the best one I've been to'
Robert Popper – 'Peep Show', 'The IT Crowd', 'South Park'

'A laugh out loud romp!  And that was just the Q & A'
VADIM JEAN – Director (‘Jiminy Glick In Lalawood’, ‘Leon The Pig Farmer’)

What can you expect at the London Screenwriters' Festival?
Die Hard Script to Screen with Jeb Stuart #LondonSWF
The Truth: Writer & Producer Frank Spotnitz
Script To Screen with 'Day Of The Flowers', Brit romance feature film
Why pitching is SO much more than selling your film...
Screenwriter Eirene Houston now CONFIRMED to join producer, director and DP for Script To ...

The Guerilla Film Makers Handbooks on Kindle and eBooks… and iPad
Storyboarding, from idea, to script, to thumbnail, to board…