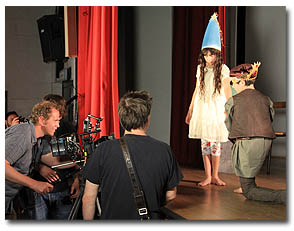 I have been a little light on the blog front because I have been on set shooting a drama on Canon 5D MKII. It’s been terrific to actually be on the set of a major drama, shooting DSLR, just ahead of the Guerilla Film Makers Masterclass as it has really focussed my mind on what is important to film makers in 2011.

Just like when I ran my Gone Fishing Masterclass on the day of the premiere, there’s no doubt that the lessons learned on this massively ambitious short film will resonate through the two day Guerilla Film Makers Masterclass (blog readers still get it for £60 using the discount code CHRISJONESBLOG)

So what exactly have I taken away from the shoot so far?

Well loads of stuff that has been widely reported previously, so I won’t go over well trodden ground (though there was an entertaining moment when we needed a third camera and about six people offered up a 7D, 550D and 60D – these cameras have truly become ubiquitous in the indie film world).
Lesson – don’t buy a 550D, 7D, 60D, borrow one, there are plenty knocking around. 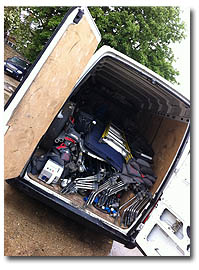 I think the biggest thing I have come to realise is that unless you are shooting with a crew of three, shooting on DSLR formats is as slow as shooting film or any other professional format. It takes just as long to line up shots, deal with depth of field (by rehearsing with a focus puller) and rehearse actors. It’s obvious really, but I was nonetheless surprised at how it took just as long to do anything as it did on the many celluloid shoots I have been on. And yes, the lighting van was pretty much as full as any Super 16mm shoot I had been on).
Lesson – schedule to do the job properly, don’t assume digital is faster.

We have been shooting two units, one on 5D MKII and one on 7D. And for me, there really is a significant difference between the 5D and the 7D (and all the newer 7D like models like the 550D / 60D). I can look at a shoot and tell which camera was used to shoot it. I really didn’t expect the difference to be so marked. 5D MkII is significantly prettier with that cinematic DOF. Of course this suits the story we are telling, a romantic wedding that we needed to look magical and ethereal.
Lesson – not all DSLRs are created equal. You do get what you pay for. 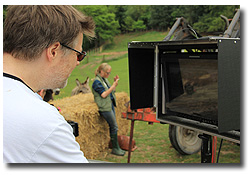 I have also been reminded that I am merely part of a large and talented team. And as a director I am at the mercy of my cast and creative HOD’s, especially costume, production design and of course camera. And each department needs the right amount of prep, the right extended team and a suitable budget. Get any of this wrong and it’s going to bite you very hard, and your film will start to look a little weak in places. Of course the whole creative team is backed up by a strong production team, constantly clearing a path in front of us and tidying up the mess we leave behind. So thank you Steven, Lucile, Sarah and of course Judy.
Lesson – thank your crew for their help, dedication and support. You will get all the credit at the end, so give as much away on set as possible. 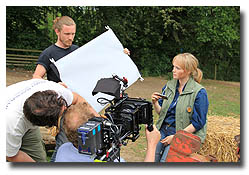 So these are just some ramblings before I head to bed before another long and challenging day tomorrow. Only three more days left!

And only a few tickets left now for The Guerilla Film Makers Masterclass, June 4th and 5th, London, £60 with my discount code CHRISJONESBLOG, for blog readers)

Get a ton of filmmaking tips, tricks and articles every day
Edgar Wright Genesis: the Guerilla Filmmakers Handbook archive interview from 2005
What are the five main outcomes for filmmakers attending the Guerilla Filmmakers Mastercla...
Failing to plan is planning to fail... Film making success lies in pre-production
Dragons, Reapers and Guerilla Filmmaking: Turning Writer to Director With My First Short ‘...
14 tips for shooting your first feature film on a micro budget from Guerilla Film grad Bri...

A great example of a Crowd Funding campaign email…
What’s the secret to getting through a huge script on limited resources?