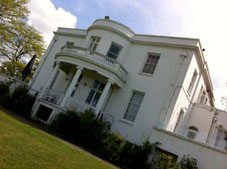 If you want to make the most out of your limited resources, look at the locations you have and tailor your screenplay to match what is available.

I learned a long time ago that moving a cast and crew from one location to another is akin to pushing an elephant up a hill. When scheduling we always, and I mean ALWAYS, under-schedule the time it takes to get from one place to another. And while we are moving, we are not shooting.

So what are the top tips for maximising a location?

1. Use what is available and rewrite scenes to match the location. Don’t force the production to find locations that perfectly match the writers imagination. At the end of the day, it’s the actors and their emotions that matter, and often the location behind them is not so vital.

3. Build micro sets (example below). Figure out how to shoot scenes in a minimalist way so that your design team can build micro sets in the corners of rooms.

4. Recce the location thoroughly and ask lots of probing questions.

5. Try and get a location release form signed in advance – you can download the one we just used here. This will force the owner to consider carefully IF they want you on their property. Download Location Release Form

6. If you are shooting like a true guerrilla film maker, out on the streets, film with stripped down DSLR as it will make you look more like a stills photographer or tourist and therefore attract less attention.

7. Don’t forget the usual logistics like ‘light’ (where is the sun at certain times), access to power (do you have enough?), sound (are you near a road?), parking, loos, catering etc.

8. Look for locations that have character, places where you have to do very little background work or dressing to make it interesting. Beware of the ‘white wall kiss of death’ syndrome, shooting in locations that are sterile and characterless. I have done it before and it looks awful!

The idea is always to create more story locations (that are visually interesting) without ever moving the production crew.

This helps your story as audiences can develop a kind of visual fatigue or claustrophobia if they feel restricted to a few locations (especially if those locations are not very interesting). It’s also easier in the edit to create more pace if you can actually move between different story locations instead of being stuck in the one place. 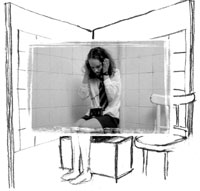 Example Micro Set from ‘Urban Ghost Story’
To plug the hole that had appeared in the edit,  we needed to shoot three new scenes with the lead character  listening to her walkman in the bathroom. The sets had long gone so we built a micro set, simply two sheets of plywood with tiles, a pipe and toilet seat that was screwed into a wooden box. The frame was kept tight and the illusion, helped by dripping water sound effects, was sealed.

Top tips for directing when you’re the only beginner on set by Kat Wood
Watch a truly innovative short film that will open doors for filmmakers
Why we should all be embracing smaller film budgets and innovating
What REALLY makes a film maker successful? One simple strategy...
The Guerilla Filmmakers Masterclass: The Final Chapter... Come for just £69
Shooting With Drones: Ten tips for filming astounding footage on a shoestring

The Guerilla Film Network is LIVE!
A great example of a Crowd Funding campaign email…