I am spending the weekend building and updating my presentation for The Guerilla Film Makers Masterclass on June 4th and 5th. (90% sold out now, so don’t wait if you want to come, and use the discount code CHRISJONESBLOG to get it for £60, reduced from £119.00 – go here http://www.guerillamasterclass.com)

And I wanted to expand on some of my thoughts, reflecting on the shoot a couple of weeks ago.

Budget and resources are always at the forefront of my mind (I learned to respect them on my first feature film The Runner back in 1990!), and yet, I see so many film makers running into problems because they don’t adequately plan.

They often hold onto unnecessary unit moves (instead of combining scenes at script stage), they cast friends in major roles, they don’t adequately work through the schedule, they don’t tailor the screenplay to their available budget and resources… and so on.

When you get to set, you are entirely at the mercy of your planning, your cast and your crew. What can you do with an actor who isn’t very good? Or isn’t right? It’s tough because as a director, I can tell you, if you don’t have the right cast you are going to feel significant pain. You can’t just say… ‘OK, take 2, but this time could you do it… better?’ You can work with actors in the moment, but there isn’t THAT much you can really do (contrary to some popular directing myths).

The same is true for locations and crewing etc. When you get to set, you can really only steer your film in a general direction. And like any large entity, your project is not going to change its direction very quickly. 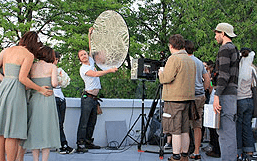 Every second of every minute of every hour of every day of every week of your shoot is a battle, tooth and nail, to just get it done.

And so getting the right team, location and schedule becomes paramount.

If you have the right cast, crew and locations, and a refined screenplay, ALL you need to do is get it done, and steer when needed. As a director, your job is 90% done before getting to set.

And so my most creative times are in pre-production and post-production, and rarely on set.

All my hard battles are won or lost in the planning.

And the outcomes of those battles end up as final skirmishes in the cutting room with fixes, reshoots and what can feel like endless re-cutting.

But I have also come to know that there is only so much you can plan. And paradoxically, sometimes too much planning can lead to rigidity on set and a lack of spontaneity.

In essence, your film is a campaign. Assemble the great team of people who ‘get it’ and chime in with you. Amass your resources (and you will never have enough). Obsess over the detail of your plan by refining your screenplay. And then go for it.

And like all great campaigns, the plans go out of the window in the very first moments.

But… having spent so long planning means you know all the parameters, ramifications and impact of the shit hitting the fan. You will know EXACTLY what to do next. And that is where GREAT film makers succeed and the ill prepared fail.

OK, better get back to my planning for the Guerilla Film Makers Masterclass… 😉

Remember you can get your ticket here (use code CHRISJONESBLOG to get it for just £60).

So we got another email from Oscars.org…
One filmmakers journey… how we met at the Guerilla Masterclass and went on an extraordinar...
Making 'Ink' with Jamin and Kiowa Winans
Calendar Girls Done...
Ray Bradbury: Top 15 quotes for writers and dreamers