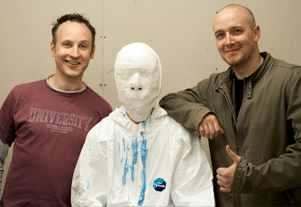 ‘My partner-in-crime, Jake Hawkins, and I have been working on our first feature full-time since January this year; victims of the recession and the need to go and do something more creatively fulfilling than sitting in front of computers all day (although, to be fair, not much has changed in that respect). The film is called Resurrection, and it starts shooting in Hampshire on 31st July; the website is at www.charmed-apocalypse.com and the truly dedicated can find the project blog at http://shootingthedead.blogspot.com.

Oh, and I should probably mention that it’s a zombie movie.

We have tried for an innovative and more cerebral spin on the genre; think Dead Set rather than Swamp Zombies. But it is still a zombie movie. Plenty of wanton splatter, head-shots and an ensemble cast far more dangerous to each other than the undead will ever be.

So we were quite relieved when we turned up to the Masterclass to hear that our choice of genre has already made the job of selling the movie to distributors a considerably easier task. God bless ya, Rhys Davies and your carefully-orchestrated Leicester holocaust.

Not that we went in to this enterprise blindly – the age demographic of people that watched the Walking Dead is a programmer’s wet-dream. But it’s a rare treat when your personal tastes overlap so nicely with the business plan; like a teenager that finds gainful employment testing video games.

Like every low-budget film-maker in the UK, Chris Jones’ books are our first port of call in pretty much every situation; the Masterclass was an easily digestible two-day summary for those that find diving into an inch-and-a-half of handbook daunting.

That said, I probably wrote the book out again in notes over the two days. My wrist hasn’t suffered so badly since they cancelled Baywatch.

We marvelled at the sheer volume of material from the highly entertaining but seemingly inexhaustible Mr Jones, we shat ourselves in all the right places (the list of stuff you need to get ready for Sales Agents was quite an eye opener, for starters), and we came away thoroughly energised and in need of a decent night’s sleep.

And what have we learned? Get a creative partner and make sure they like doing the stuff that you don’t; anything you haven’t fixed in the screenplay is going to come back louder and uglier when you get on set; nobody has a nice thing to say about Sales Agents (who occupy the same respect-vacuum normally reserved for Estate Agents and Recruitment Consultants); and accept the fact that you’ll be broke and single at the end of it all.

And that we’ll never do anything as rewarding as making this first film. After years working in the real world finding my life rushing past me faster and faster, it’s finally slowed down again. I’m going to be 41 for considerably longer than I was forty, and that’s almost reward enough of the endeavour.

That said, it’ll count in dog years when I come to tot up the wrinkles. Shiny.