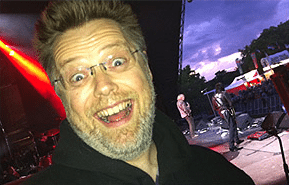 Last weekend I managed to get VIP tickets to the Fein Festival in Finsbury Park. And I ended up onstage with Thin Lizzy for the final set of the event. It’s a long story as to how this happened and it was a lovely unfolding evening of surprises for both Lucia and myself.

It was also a privileged and intimate glimpse into another sector of the show business.

The parallels with the film industry were startlingly clear – the event was a bunch of front people being supported by a tireless support crew, everyone in the pursuit of delivering a powerful emotional experience for the audience.

And I was stuck by the professionalism and dedication of everyone to delivering that experience.

One big difference though was immediate feedback.

Unlike film making where feedback comes many months or years later, feedback from this audience was immediate and passionate. That created an electric atmosphere that the boys in the band knew exactly how to work. Being onstage and feeling that energy was I must say, something else!

And at the end of the night, we also got to hang out back stage with the band.

And once again, the film parallels were so clear. The ‘green room’ was a portacabin with a sofa, with a plastic table crammed with sandwiches, cokes and water. Glamour? Nope, didn’t see much of that. Passion, energy and fun? Yep, that was there aplenty. 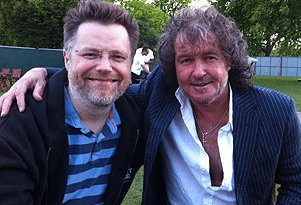 Keyboardist in the band, Darren Wharton, had been my host for the evening and he was good enough to introduce me to all the band members individually. Once again, I was amazed at the professionalism displayed. Every one of them made me feel special, gave me their full attention, and at the appropriate moment, bowed out gracefully to get back to their personal friends and family who were with them.

For me, this is a large part of why they are still successfully playing to audiences of 80,000 people.

We got to bed at 2am on Sunday evening, both chuckling away at the evenings escapades. And there is a hilarious short video that gives the feel of what we experienced below.

Stunt Co-ordinator gets onboard
Top Ten Things To Consider When Mixing The Sound For Your Film In A Professional Dubbing T...
Yesterday, Polish composer Wojciech Kilar died
Gone Fishing Proposal - Final Proofs Before Printing
DVD Cover printing - How to do it

Which email service should YOU use to stay in touch with your group?
Making ‘Zombie Undead’ at The Guerilla Film Makers Masterclass