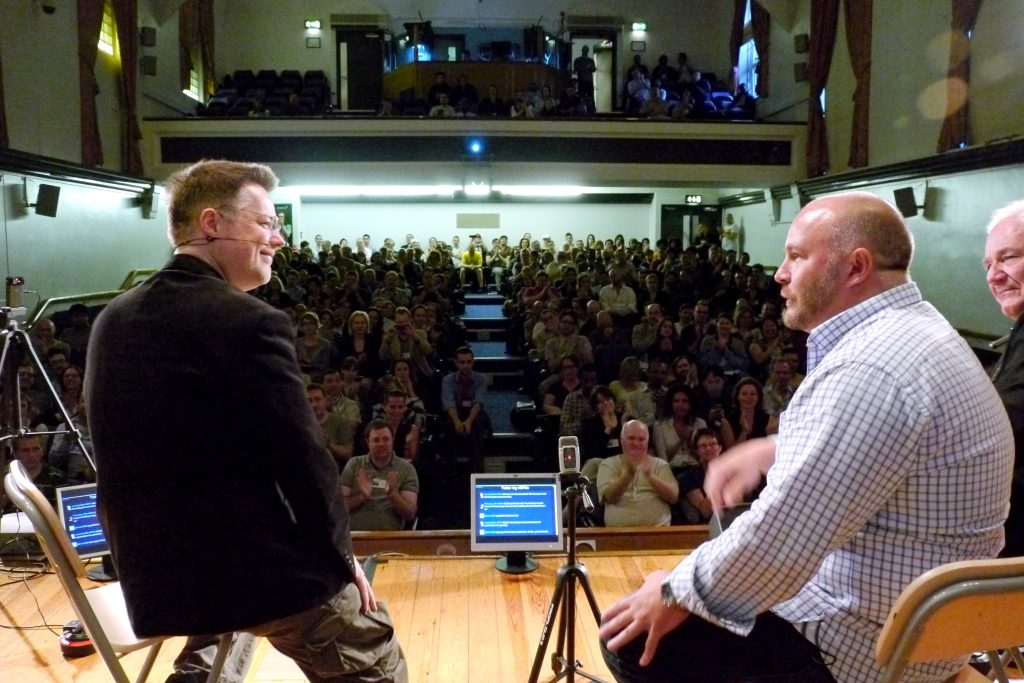 Being in a room with 370 energised, passionate and determined film makers for a whole weekend is something that inevitably creates an electric atmosphere of possibilities.

And while many of the film makers present have been thanking me for their own experience and breakthroughs at the Guerilla Film Makers Masterclass, I have been reflecting on what I also got from the experience. (The next masterclass is June 15th / 16th 2013 – http://www.guerillamasterclass.com – get £50 off with code CHRISJONES)

While the two days are crammed with detail about how to make your first feature film, for me at least, the more valuable part of the event was the conversation we had about ‘why’ we make films.

We discussed our expectations, our dreams, our goals, our definition of success and of failure, our strengths and our weaknesses…

It was both open and frank.

It was also public and often surprising.

It was this process of confronting some deeply held, long term views, while in a public setting, that caused many film makers to begin questioning exactly what they are doing and why. 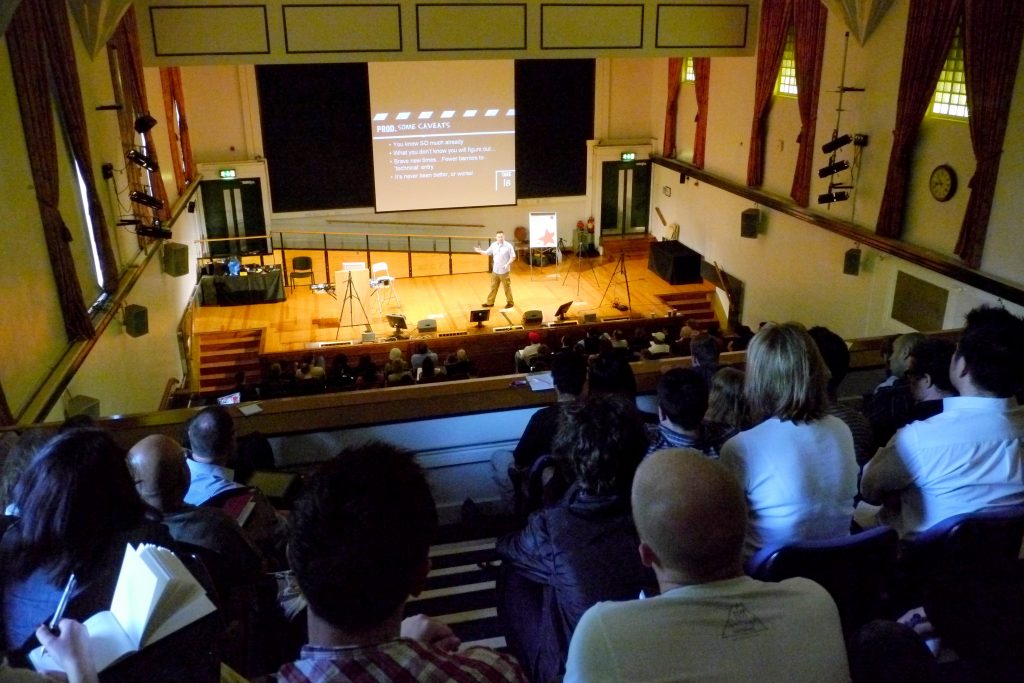 And that was my aim. To shake film makers up enough so that they would reconsider their choices and not just follow conventional wisdom (that at best is based on outdated practices).

We can often feel that we should make a certain film or write a script in a particular genre for a long list of really, really compelling reasons.

We can often feel that there is a way that ‘it should be’.

Or there is a destination that we need to get to.

A place where success is waiting for us, like some old friend sat by an inviting fire.

If only we could get ‘over there…’, instead of working hard ‘right here’.

Consider…‘over there’ does not exist. ‘Over there’ is an imagined place.

Whereas ‘right here’ REALLY does exist, and is filled with amazing possibilities.

Ask yourself, do you spend your time imagining ‘over there’? Or are you active ‘right here’?

Remember, ‘over there’ is NOT real, whereas ‘right here’ is big, bright, noisy, dynamic and very definitely happening!

So how can we loose touch with the ‘here and now’?

As creatives and entrepreneurs, I often see that we are not actively choosing our projects (though we think we are), more often the circumstance, myths and opinions in our environments begin to seduce us to make choices that the kid inside us, the one that lives in the ‘here and now’, would never choose.

I see it most clearly when film makers apply for funding, and in the process of filling out a form, they begin to modify their dreams, ideas, creativity… their choices.

Over analysing the success of others can lead to the same place too… ‘If I do what they did, I will get success too’.

It’s that sense that ‘something is wrong’, or ‘I should be doing something else’, or ‘I should be someplace other than here’. It all serves to shut down creativity in people, so they end up living in a future imagined place and not in the present.

Of course, one could say this is a pragmatic way to get films made. And you would be right too. But over the course of months and years, this process and belief system can erode the passion for what we do.

And so my aim at the workshop was to reconnect as many film makers as I could, with that original spark, that passion, that giddy sense of ‘what if…’ that keeps us awake in bed at night.

And for many present, I know they had that outcome.

A typical paraphrased conversation would go like this… ‘I have been working on a horror film as I thought that’s what I should do. But what really started me off as a film maker was balling my eyes out at ET!’

It’s not that this film maker wants to remake ET. But they do want to reconnected with that sense of wonder and exhilaration they experienced when they made their choice to pursue film making, and for them, ET was a large part of that choice.

It’s about the emotional experience they had at that time, and recapturing THAT feeling in their day to day work.

Of course, some of us are still hell bent on making zombie movies too, which is cool 😉

And this change in view, from darker stories, to more positive stories, was a constant theme over the two days. Film makers seemed to be reverting back to their youthful genesis, moving away from what they thought they should do, to re-engaging with what keeps them awake with excitement in bed (of course, some of us are still hell bent on making Zombie movies too ;-))

This shift makes even more sense when married with the main theme of the masterclass.

You have ALL YOU NEED AROUND YOU! JUST ASK! Cameras, crew, money, locations, actors… it’s ALL there. What attracts those resources though is genuine, authentic and enthusiastic passion for a story you NEED TO TELL.

Folllowing the carrot of ‘how it should be’ can lead to a vicious circle of decline, whereas accepting ‘what is, is…’ and then pursuing what you really want, RIGHT NOW, with genuine passion… that becomes a ‘possibility attractor’.

Of course, we still need to make smart, informed and tactical choices along the way.

And we also need to add MASSIVE action too. We can’t wait for success to find us, we need to go make it happen.

But like any long term relationship, success or failure so often lies in that very first choice. What do I want to do? And why am I making that choice?

What struck me at the masterclass too was the generosity, community and sharing that was present in the room. And that has continued through in the delegate social network too, where there is a constant chatter of film makers connecting and helping one another. This is ALL part of the new model. Of sharing resources and knowledge, and of helping one another. 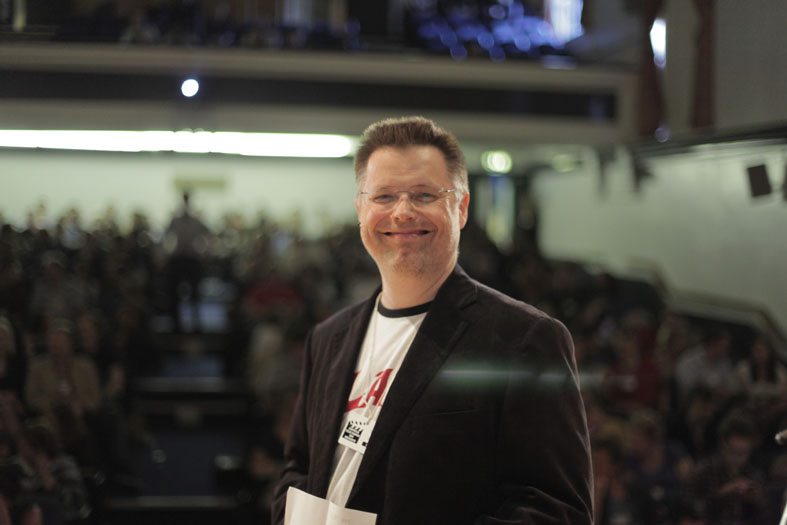 So to answer my own question. What did I get from the masterclass?

In short, I got to make a difference.

Being given the opportunity to share deep and powerful ideas that can change lives, for me at least, makes it all worth while.

So give yourself a break now.

What is it that you REALLY want to do?

Look at what you have around you right now.

And then MAKE IT HAPPEN.

Bring it on baby!

The next masterclass is June 15th / 16th 2013 – http://www.guerillamasterclass.com
Get £50 off with code CHRISJONES

Actor turns director and gets more traction with short than reel, CV and headshot: Guest b...
Top Ten Kick Ass Tips For Shooting Action Horror From 'Zomblies' Director Dave Reynolds
How to Turn Your Followers into Doers... How I did it in my Fantasy Epic by Kate Madison
Guerilla Film Makers Masterclass Alumni Rhys Davies: Micro Budget Horror Case Study, Relea...
Everything you need to make a feature film for cinema release
The Guerilla Film Makers Masterclass, Final Feedback
Meet Jonathan Newman, writer and director of ‘Swinging With The Finkels’, inspiring Q&A

8 Responses to What REALLY makes a film maker successful? One simple strategy…