Do you have Klout? http://klout.com/#/livingspiritpix 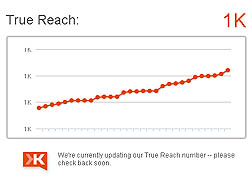 Klout is an online tool that analyses and rates your social media presence, engagement, influence, outreach… however the heck you want to describe it, and offers up a single simple score.

So how does it work and why is this important?

You sign up, add your social media links like Facebook and Twitter, then Klout analyses the data, looks at how people engage with you, considers who those people are and what standing they have… etc. It uses 35 variables and has three major ways of marking the data…

Here’s what the Klout site says…

True Reach
True Reach is the size of your engaged audience. We eliminate inactive and spam accounts, and only include accounts that you influence. To do this we calculate influence for each individual relationship taking into account factors such as whether an individual has shared or acted upon your content and the likelihood that they saw it.

Network Influence
Network Influence is the influence level of your engaged audience. Engagement is measured based on actions such as retweets, @messages, follows, lists, comments, and likes. Each time a person performs one of these actions it is a testament to the authority and the quality of your content. Capturing the attention of influencers is no easy task, and those who are able to do so are typically creating spectacular content. Network Score looks at the Klout score of each person who interacts with you to determine:

There is a full breakdown of the analysis here…
http://corp.klout.com/kscore 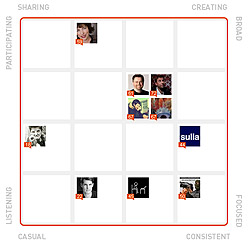 The upshot is that Klout has given me a score of 61 today, and considers me a ‘Thought Leader’ :-0. It will even rate you against other people in a rather nifty chart – you can see it here (add your Twitter handle to the box at the top of the screen to see your own quick score).

So why is this so important to film makers?

Well first off, yes, Klout can be skewed by some naughty tricks, and no, Klout is not the best or only way to measure your presence and engagement. But, it is becoming ubiquitous, it does work (in so much as it gives a pretty good analysis), it’s simple and elegant, and it ends up with one nice figure which reminds us to take action!

So Klout is a great way to seek online collaborators or genuine influencers in your community. It’s one thing seeing lots of Facebook activity or Twittering, but it’s another thing when you get considered analysis as to whether that person is just a loud person in a small room or a respected influencer in a hall of important people.

Using Klout is a small part of a workshop I am building for film makers, about online presences and social media, aimed at beginners and intermediates. The idea is that everyone will leave with an accelerated understanding of online tools, AND with a whole new bespoke and personalised arsenal, built and running by the end of the class (so laptops and iPads are recommended so you can set it up there and then).

If you are interested in this workshop, sign up below and I will be in touch very soon.

Finally, Klout is just one tool of many. While it is a helping indicator, it is not an absolute or official rating of real value. Fundamentally, it’s taking something qualitative and making it quantitative, which may undermine the whole concept in the value of genuine engagement and influence. These are subtle relationships and difficult to rate. So use it, but don’t get obsessed by it…

Right, I better just go and see if this blog entry has increased my Klout score…

PS – Do you have any tips for increasing your Klout score?

Facebook and Instagram Jail… A Cautionary Tale…
Brand Engagement Like It SHOULD Be Done Today - Learning From Bodyform
Are we killing our creativity with social media?
Are you a digital native or a digital immigrant?
How to Turn Your Followers into Doers... How I did it in my Fantasy Epic by Kate Madison
I am supporting ‘Clowning Around’, are you?
Why Your Twitter Photo Is SO Important