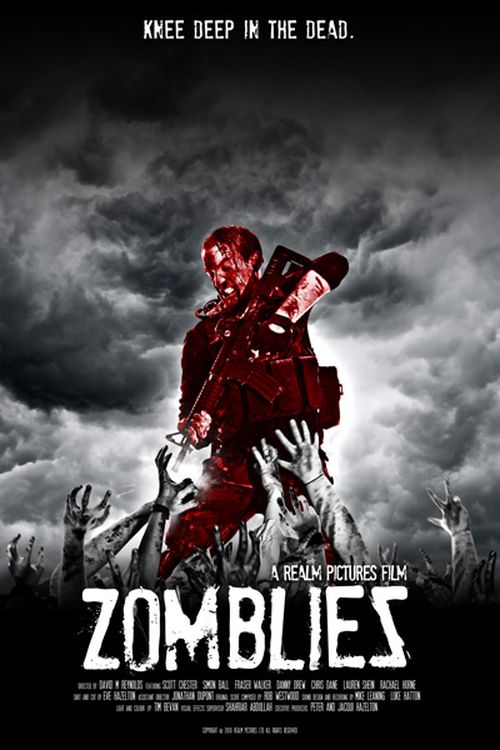 Dave Reynolds, who you may recall from The Production Office, finally released his horror movies Zomblies on YouTube, and so I asked him to write me his top ten tips for shooting Zombie movies. You can watch the FULL MOVIE above too (remember to go full screen and switch to HD).

Dave and his team also made a wonderful short about indie film making which I blogged about earlier this year, you can read about that here.

You know when you buy cheap ice-cream from a store, crack the tub open and it is full of ice crystals? Notice how good ice cream doesn’t do that? That is because of a great chemical called Carboxy-Methyl-Cellulose or CMC. It is also the best thing to make blood from. Order it from any good industrial food supplier, mix with water and food colouring for a very real screen blood at a cost of more like 50p / Litre.

You can order our ‘Blood Grade 2’ colour from Forrester Wood – a pigment we had mixed especially for Zomblies.

And for all those scabs, dried wounds and scratches – mix cheap instant coffee with red food colouring and apply with a plastic knife. A huge amount of the makeup in the film was done this way. It’s cheap, and the caffeine keeps your actors going much longer…

BOTH OF THE ABOVE RECIPES ARE VERY DIFFICULT TO WASH OFF – BE WARNED.

2. Rodriguez list
Let’s assume you don’t have any money. One of the best things you can do to add production value to your action scene is to make one of these (term coined by the magnificent Stu Maschwitz – referencing Robert Rodriguez’s attitude).

Make a list of all the cool/unusual things you have access to. Then see if they help you come up with gags for a scene. For us, high on the list was my old 1989 Honda Bros and a quadbike from a local farmer. Add in an abandoned warehouse, some zombies and some digital explosions and you have the following scene at next to no cost: http://www.youtube.com/watch?v=lwPlTYjCQWA&feature=player_detailpage#t=2340s

We use a 7D all the time for pretty pieces – but just try shooting a chase scene from the back of a quadbike with one… we used a Sony EX1 (sometimes with a Letus Extreme – it was 2008 afterall) for Zomblies, it’s a great tough camera that is easy to throw around, and very easy to control on the fly.

4. Fuller’s Earth
This stuff is gold-dust. Get 20kg nice and cheap and making things dusty & dirty, or adding a bit of weight to your explosions just became 1000 times easier.

5. Action Essentials 2
If you want to use visual effects in your action scene, you have no excuse for not owning this package of fantastic stock footage from Aaaaaandrew Kramer of videocopilot.net

Watch this scene again – all the explosions are courtesy of Action Movie Essentials 2K: http://www.youtube.com/watch?v=lwPlTYjCQWA&feature=player_detailpage#t=2340s

6. Think outside the box
Don’t rely on visual effects for everything – sometimes they are cheaper, and they are almost always safer, but it is almost impossible to beat the look of an in-camera effect.

We couldn’t afford explosions – and we didn’t want to put our extras at risk with home-made petrol ones, so we manufactured four compressed air cannons. When these babies are filled up to 120 psi and loaded with a muzzle full of dirt clods and fullers earth you get a really nice bang 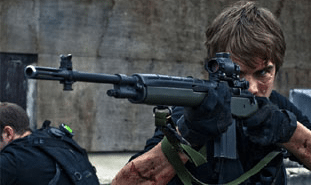 7. Airsoft Guns & Muzzleplug
These are cheap, legal (ish) and very realistic. There wasn’t a single blank round fired on Zomblies, instead scenes like this were mimed on location and then the muzzle flashes, shell ejections, moving parts etc were added in post (watch out for the M14 recoil) : http://www.youtube.com/watch?v=lwPlTYjCQWA&feature=player_detailpage#t=779s

Muzzle flashes are best achieved in After Effects with the use of a wonderful plug-in from FXHome called Muzzleplug.

8. Storyboard
Remember “failing to plan is planning to fail” and “proper preparation prevents piss poor performance” and other such nonsense? Well with action scenes, it’s true…

You can shoot a lot of scenes on the fly – but action and stunt scenes rely so heavily on the cut you can come unstuck really fast if you don’t plan your shots.

You don’t have to be able to draw – just check out our recent tutorial on quick, easy storyboarding for TheUnderWaterRealm: http://vimeo.com/22552454

To fully understand the power of a well-planned gag watch your favourite action scenes frame-by-frame (anything by Ridley Scott works for me). You will be amazed how many brutal, impactful stunts are actually nothing more than clever implication. 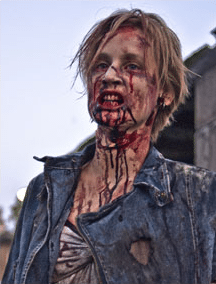 9. Scenes within scenes
You action scenes are not just a way of adding ‘cool stuff’ to your movie, they are a way of exposing character through tension and physical obstacles. Think of them as a struggle between your protagonist and antagonist(s) played out as a series of mini-scenes. Set objectives – resolve them – lead into next objective. We call these ‘gags’.

Villain leaps over fence. Hero cannot climb fence. Hero jumps in someone’s waiting car and drives through fence. Hero is now chasing Villain down back alley in a car, and we are on to the next gag.

10.   Lens Choice
A big part of learning to shoot action is about learning what focal length to use for a given shot. This should become part of your storyboarding process.

Wide angle glass is great for enhancing motion towards or right past camera, while telephoto is better for movement across frame.

WOW! Thanks Dave, and let us know how Zomblies goes down. Do you have any action horror movie tips to share?

The Top FIVE Steps To Getting Your Film Funded
Reflecting On The Year… And why need to celebrate more
How To Write A Guest Blog Post: Top 19 tips to getting your message out
What REALLY makes a film maker successful? One simple strategy...
Top tips for directing when you’re the only beginner on set by Kat Wood

Annual Film Makers and Screenwriters Summer Networking BBQ – Tickets GBP £3
I am supporting ‘Clowning Around’, are you?