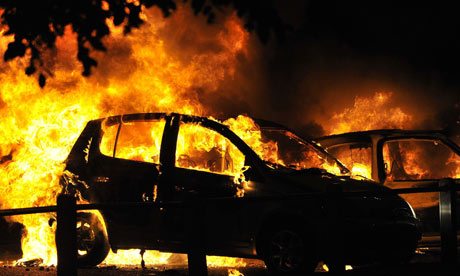 I awoke today having only had four hours sleep. I immediately turned on the TV to see the roads outside my studios office transformed into some kind of battleground.

The whole Living Spirit team was told to stay home today, and later in the day I got a text from Stephen Follows saying ‘The studios have been evacuated’ (this following intelligence that further rioting was imminent). So far that violence has not manifested, in Ealing at least.

I picked up the video above on Twitter, made by a film maker in Ealing (Kris Thompson, who I don’t know – his youtube channel here ). To me it looks like it was shot on one of the cheaper DSLRs at 50p or 60p, but it does offer another view of events on the street from last night. To me the footage looks more like a movie than a document and I keep reminding myself that I know those streets intimately, I walk down them most days, I eat in those restaraunts… The use of slow motion, music and sound effects serves to enhance that ‘movie’ feel. Whether that is appropriate or not, I don’t know, but it certainly captures the feel of what it was like on the streets in a way that does not feel like news footage.

No actors, no sets… just reality.

Ealing Riots… is this really my home town?
London Riots… the aftermath for film distribution

8 Responses to Ealing Riots… Am I In A Movie?