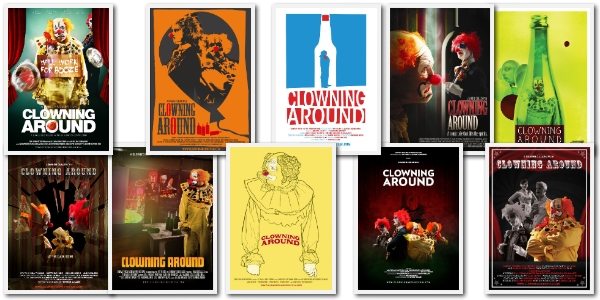 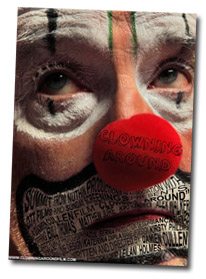 Leilani Holmes, film maker and friend, was one of the most vocal supporters of ‘Gone Fishing’.

And so when I heard she was making a film, ‘Clowning Around’, and running an IndieGoGo campaign, I was one of the first to contribute.

Lielani and her team ran a stellar campaign and raised $8,900 in total.

One of the very clever things they did was to create a poster competition. The team took a bunch of photos of their actors and released them for designers and film makers to use and create their own posters. And they got over 100 entries (you can see all 100 here on their Facebook page).

I was honoured to be asked to be a judge and so today, I make my selection from the top 11.

Having been to may festivals I have seen walls plastered with posters and for me, the posters that win out are the ones that…

So what is so smart about this competition is that it engages creative people now, before the film is made. It also solves the problem of designing a great poster before the film goes into production. This is a great example of effective Crowd Sourcing. It’s fun, it’s about being part of something and it’s got a competitive edge.

On this post are the 11 finalists. Which do you think are the best ones? My personal favourite is number 6, the one with the big face and red nose. For it just works.

The official Clowning Around site is here http://clowningaroundfilm.com/

And if you want to enter one of our competitions currently running, you can check them out on the London Screenwriters’ Festival homepage here… we just had Paul Greengrass confirm as a judge!

Well done Team ‘Clowning Around’, I look forward to hearing how pre production is going.

If you want to know more about crowdfunding, I did a podcast with IndieGoGo a while back – you can hear it here…

Gone Fishing on Korean Fishing TV channel!
Amanda Palmer and her TED talk on Crowdfunding, 'The Art of Asking'
Successful Crowdfunding Old Skool: Raise money for your film by posting letters through pe...
Gone Fishing Proposal - Final Proofs Before Printing
Five Important Lessons that I used on my feature film 'The Journey'
How to shoot a wedding video on your iPhone, transfer to iPad and edit it… all before dinner!
Why community and total immersion is so important to creative people

4 Responses to How To Crowd Source Your Movie Poster Design… run a competition!