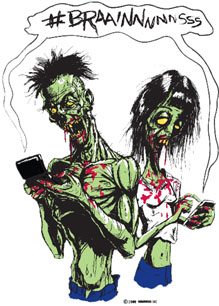 Off the back of the success of #Comfest for the London Comedy Writers’ Genre Fest back in April, Team LSF are delighted to announce a GHOULISHLY good new contest based around Halloween for London Screenwriters’ Festival 2011, which takes place this October.

Want to a win a ticket to the event? Here’s what you do:

Write a logline of 140 characters – including hashtag #LSFHorror – for a HORROR FILM and post it to Twitter.

The logline can be for a REAL project or for an imaginary one – it’s up to you.

THAT’S IT! Read the most recent entrants below. Can you do better?

It’s not a Horror Festival, why have you chosen a horror logline contest this time?
‘Cos it’s Halloween the Monday after the festival … And ‘cos Judy, the festival manager, needs some inspiration about what she’s going to do to unwind… Some SAW booby-trap-type antics? Sucking unsuspecting victims’ blood? Terrorising some people in the woods?

How many times can I enter this one?
You can enter three times. Any seen after the third will be disregarded.

What if I forget the #LSFHorror hashtag in my tweet?
Then you won’t get entered into the contest! The hashtag is to help us with our searches and make sure no one gets missed, so make sure you include it.

Can people from overseas enter?
Yes.

How will you pick the winner?
Team LSF will pool its opinions and pick its favourite 10 from the tweets (after Sept 9th). We will then rank the top ten in order of preference. The top ten will be published to the LSF site at London Screenwriters’ Festival 2011

Can I post my logline on the LSF Facebook page?
No, sorry – the twitfest is Twitter only, any loglines written on the FB page will be disregarded.

I’m not sure what a logline is, can you help?
Sure. Check out The Required Reading List – Loglines has its own section! Find it here: www.tinyurl.com/reqdreading

Can I enter a hybrid genre logline, ie. Horror-comedy, Horror-SF, etc?
Of course you can. But do make sure we can know what it is from the *tone* of the logline!

I’m not on Twitter. Can you post my logline for me?
No, sorry – we’ve got loads of admin on at the moment and we’d hate to go and forget your loglines, so this is a Twitter contest ONLY. Why not join Twitter though? It’s free and offers loads of great contacts and info for writers, especially if you follow the #scriptchat hashtag. A guide to getting started on Twitter: http://lucyvee.blogspot.com/2010/03/twits-guide-to-twitter.html

140 Characters minus #LSFHorror, are you kidding? That’s totally not enough space to write my logline.
You’d be surprised how much you can squeeze into a tweet, even with a hashtag! It’s certainly a handy exercise for writers, give it a go!

Hmmmm…. I dunno. If I post my logline online like this, how do I know Team LSF won’t try to nick my idea? Or one of the delegates??
You can’t copyright an idea anyway. Plus script readers see the same ideas ALL THE TIME, it’s the execution of that idea that counts. Really! So why not give our contest a go? You’ve REALLY got nothing to lose… Check out this post about WHY people don’t nick scripts or ideas: http://lucyvee.blogspot.com/2011/02/wont-someone-nick-my-script-or-idea.html

Now get Tweeting something ghoulish!

Onwards and on this occasion… downward to helllll!!!!!!

Get a ton of filmmaking tips, tricks and articles every day
Live Feedback From The Guerilla Film Makers Masterclass With #GFilm Hashtag
Entering competitions and funding processes - top nine tips from the real world
How to spot people who buy fake Twitter followers... and why IF you do buy fake followers,...
Near Kisses for 50 Kisses
Well that happened...! Blood, guts and glory at Guerilla Film Masterclass
How to communicate to get what you want, top strategies and pitfalls to avoid
Special event, Oscar winners Gareth Unwin and David Seidler on ‘The King’s Speech’