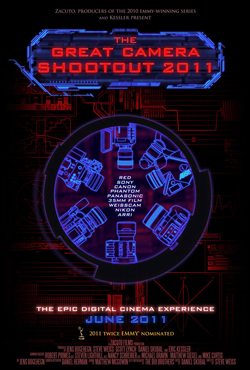 Earlier this year I was invited by Philip Bloom to come and watch a series of camera tests that compared a bunch of cameras that are available to film makers today. At the bottom end was the DSLR family, at the top end Alexa and film.

The footage was screened from a DCP in a top notch theatre, so conditions could not have been better. I will leave all the detail to the films themselves, but here’s what struck me. All the cameras looked pretty damn good. Any one of them could be used to shoot a low budget feature. Sure, some had peculiarisms, but so do all formats.

The cameras were all compared to film too, which I am sad to say, performed pretty poorly in comparison. Weave, grain, scratches, dirt… Yikes!

Now… let me be clear.

Film is still the preferred format for me. Given a budget, there are no digital formats can match it. BUT… with restricted budgets, I really can’t see how film makes sense. Again, to be clear, I love shooting film. I would fight for it. And that’s why I struggled when I dropped the bombshell that no-one else in the room was either seeing or was saying… ‘film is dead’.

Yes there were audible gasps from some DPs, and yes I did get an ear bending from the Kodak and Fuji reps afterward.

So is film dead for indie film makers?

I asked my friend Danny Lacey to comment as he had just shot a film on Super 16mm, and this weekend is shooting a film digitally with Philip Bloom. Here’s what Danny said… 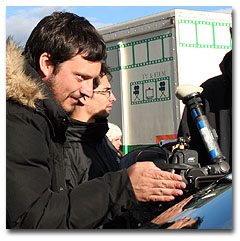 ‘Shooting my first major short film project on Super16mm is something I’ll never regret. Something I’d do again? No. Well, at least not in the foreseeable future. The great thing about shooting on celluloid was experiencing the discipline that the format absolutely demands. A discipline that I will be using on future projects. For me that’s the true romance of making films, not the format, but the discipline. I’m talking about working with an experienced and talented crew, the process, taking time to get the lighting just right etc.

Shooting on film is way too expensive for indie film projects. I managed to pull in an incredible amount of favours and good deals, yet it still ended up costing heaps of cash! This wasn’t the only problem for me. There was the lack of control I had in post. The whole telecine process for me has been a nightmare and an expensive one at that. There are so many expensive processes that the film has to go through (i.e. TK offline, conforming online etc). It’s almost 9 months since principal photography on Love Like Hers and I am yet to see one single frame of online footage! And this is a few thousand pounds later!

For me, it’s digital all the way for my next project. I’m not talking about DSLR’s either, we’re looking at the RED MX, Arri Alexa etc for the next film, high end kit. It’s a no brainer. The quality of the picture is comparable to film, yet it’s way cheaper and has a much more pleasing post-production workflow.

Shooting on film is very much a novelty, and that’s the way I see it. It has become a novelty item for a lot of indie filmmaker’s. Can the cinema going public really see the difference between film and digital? Of course they can’t! Our ‘in-house’ obsession with shooting on film, or any format for that matter can often leave us to overlook the single most important thing about any film – story.’

Top Ten Kick Ass Tips For Shooting Action Horror From 'Zomblies' Director Dave Reynolds
We made an Xmas movie and you can watch it now...
How You Can Define Success for Your No-Budget Guerrilla Film by Brian Barnes
Independent Filmmakers Rough Guide to Aperture, F-stops and Shutter Speed
'Ghost Girl', terrific short from the Isle Of Man, shot on Canon 5D MkII
14 Things I Learned Making An Epic Fantasy Feature Film On A Low-Budget
The One Page Movie Competition Officially BEGINS NOW!
A guide to tax for creative people aka How to keep more of YOUR money!

4 Responses to Film is dead!