By Chris Jones on November 14, 2011 in Screenplay, Screenwriters Festival 0

‘A good kick in the conventions…!’ Pete Dodd, Director 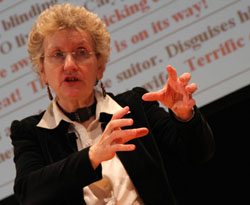 This weekend we ran the 2 day 21st Century Screenwriter Masterclass with Linda Aronson. Nearly 200 screenwriters and filmmakers crammed into Tuke Hall at Regents College to listen in awe at an extraordinarily detailed seminar on contemporary screenwriting. The delegates said it best…

‘What worked 50 years ago will not necessarily work today. Look at how Music has changed. Is Little Brown Jug anything like Poker Face? I think not. Culture, society and people move on’ Gail Hackston

This comment goes to the very heart of the workshop. Linda tackled head on the notion that the traditional three act structure with a single protagonist does not suit all films. Indeed, more and more film scripts, and especially television scripts, are drifting further from this classical model. 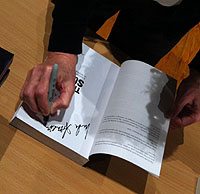 If you missed the workshop, we do have 11 copies of her book left, which in many ways, is the workshop written down. Linda was good enough to sign these copies, so grab one now – they are £20 plus £5 shipping – use button below.

‘It was one of those light bulb moments when suddenly everything made sense’
Deanna Dewry, Writer turned director
www.GullFilms.com

‘I was open mouthed at so many fantastic ideas!’
Debbie Manship, Writer

‘I had already started using these forms intuitively. Now I can write more effectively with a clear understanding of these tools’
Scott Baker, Screenwriter/Director
@SpockWriter

‘This is the course I have been waiting for – an in-depth explanation and analysis of modern screenwriting structure that will help me in developing my screenplay into a unique, original and groundbreaking script – ten out of ten!’
Alexander Denye, Screenwriter

‘I’ve been struggling with my script for some time. But on Saturday night, halfway through the course, I restructured successfully using one of Linda’s parallel narrative structures’
Ian Dawer, Screenwriter

‘After six months stuck on an outline of a thriller, I now know what I need to do to fix the structure’
Robyn Evans, Screenwriter
SirenOfBrixton.Wordpress.com

‘After a two year break, Linda has given me the inspiration to get back to my first love, screenwriting’
Jenny Page, Screenwriter

‘Linda has helped me solve problems that have plagued my stories… Thankyou!’
Anthony Etherington, Screenwriter

‘useful for writers as well as filmmakers’
Damia Kirkali, Filmmaker

‘The best money I have ever spent!’
Ana Regal, Writer

‘challenging and liberating at the same time’
Mirker Hojnar, Writer

‘It gave me the tools I needed to tell my story in the best possible way’
Elana Dapelo, Actress / Writer

‘Linda’s insights were dazzling and her knowledge of the nuts and bolts of narrative extensive – she’s fantastic!’
Ruth O’Donnell, Writer / Director

What can we learn from (Oscar nominated screenwriter) Sylvester Stallone? 40 minute master...
Edgar Wright in conversation: One hour screenwriter and filmmaker masterclass
Who are you writing for? One technique to help you focus on your target audience
Want great actors for your film? Write a script with a female lead
There is no conspiracy to keep good writers out of the industry
Advanced Screenwriting Techniques with Linda Aronson
Which editing software should you use? Avid? Final Cut Pro? …Lightworks?