Join hundreds of delegates for a two-day event that details cutting edge and contemporary documentary film making techniques, strategies and success stories, from conception through to completion.

The Documentary Summit is led by Los Angeles based film maker and author of THE DOCUMENTARY FILMMAKERS HANDBOOK, Andrew Zinnes. He will be joined by a group of distinguished industry guest speakers covering all aspects of documentary film making in 2011 and beyond.

Documentary Of The Day

Every day, between now and the Documentary Summit, we will share an extraordinary documentary film with you. These wonderful productions are made by film makers like you, with passion for their story, and a camera in their hand. Be inspired! You can view them on the official site at http://www.documentarysummit.com/ 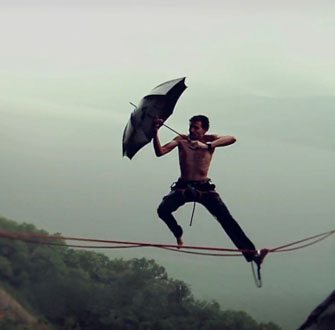 Today it is… ‘I Believe I can Fly ( flight of the frenchies)’ (above)
Months of training led the Skyliners team to attempt their dream of complete freedom… the freedom of flight! It really shows what people are doing with DSLR. Amazing stuff.
The film maker: facebook.com/​pages/​Seb-Montaz-Video-blog/​149892381710213
More about the Skyliners team: facebook.com/​pages/​Skyliners/​27000682636743

Are you making a documentary?

New film makers across the world are creating extraordinary documentaries, reaching audiences, making both money and a name for themselves, sometimes even catalysing profound change in the way people behave.

ANYONE can start telling their story and making their documentary right now. Compelling footage and great narrative does not need a big camera or large crew. The phone in your pocket is as good a tool as any, IF you have a great story AND a great angle.

If you already have the great idea and the basic tools, why are you failing to make significant headway with your project?

The Problem We All Face
Documentaries are often pioneered by a single person, or a partnership. That’s great as doc teams need to be lean and dynamic. But making a documentary requires such a broad and diverse skill set that very few people can cover all the bases. There are always blind spots and weaknesses in your plan.

And that’s where we come in.

THE DOCUMENTARY SUMMIT will take you through EVERY step of the process, discussing the more important aspects with our visiting industry experts.

JAMES COLLIE
Producer and DIY Distributor of Beyond Biba and Doc Consultant.
MORE…

EMILY JAMES and LAUREN SIMPSON
Film makers behind the riotous hit, ‘Just Do It’. Inspirational!
MORE…

Join hundreds of documentary film makers just like you

Central to the summit however are the delegates. After running large scale film making events over the last year (The Guerilla Film Makers Masterclass, London Screenwriters’ Festival, Comedy Writers’ Festival), we have found that the community and collaborative possibilities presented by the delegates at the event are just as essential as the speakers on stage.

So come and join us for the Documentary Summit, a learning and networking experience like no other.

Watch 'Dreams On Spec' here... A 'must-see' for all screenwriters
Powerful and inspirational seminar; an insight into Documentary Film Making with Geoffrey ...
Watch extraordinary documentary about the making of arguably the greatest movie ever made:...
Final Call for the London Documentary Summit this weekend
Stunning trilogy of Star Wars documentaries... lose an entire weekend!
Airwolf: Why not make a documentary about a TV series you LOVED as a kid? That's what Mart...

‘Make it real but unusual’, Linda Aronson closing advice
Come to the London Screenwriters’ Festival 2012 for £24 a month (10 months)