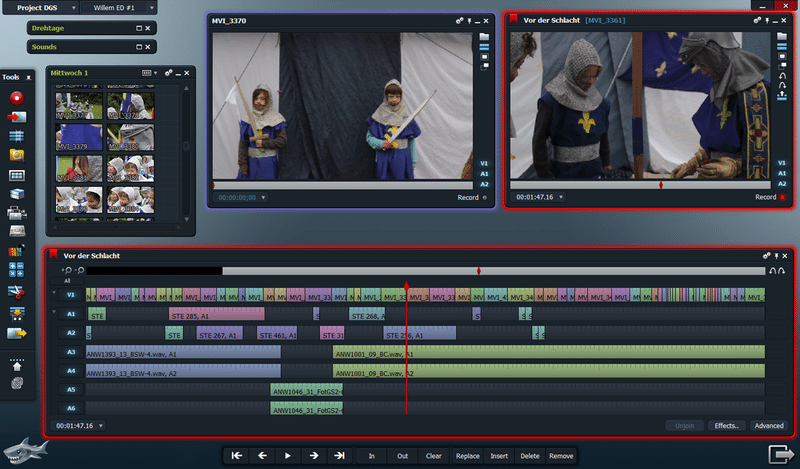 If I had a second career, I suspect I would have been an editor. I learned very early on that editing is perhaps the most powerful tool in the film making process – that is of course after the freedom of imagination in the script process, the tyranny of budget and fallibility of human beings in production.

Back in the day I used to own a Steenbeck and pic-sync, cutting features on film. Then I moved to Avid and have found it a fantastic tool.

Then Final Cut pro came onto the scene, dominated for a year or three, then spectacularly self destructed earlier this year. Yes I know Apple have promised all manner of fixes and stuff, but they have proven beyond doubt that they cannot be trusted (by ditching pro grading suite ‘Color’ for instance). And most recently Avid have come back with Media Composer 6 running in a super fast 64bit environment with a ton of cool new stuff.

But if you are starting out, Avid is an expensive tool, and personally I would not trust or invest in any Apple post production tools now.

Enter Lightworks. Why should you be interested? Lightworks is free.

In the first edition of The Guerilla Film Makers Handbook back in ’94, I interviewed a Lightworks editor – back then Avid and Lightworks were neck and neck in the non linear market. So Lightworks is a professional tool with an incredible pedigree and heritage. Not convinced? Well ‘The Kings Speech’ was cut using it, so if it’s good enough for the Oscar winner this year, I suggest it’s good enough for any of us. And if you want to hear the view of an Editor, check on the interview with Jill Billcock here (Strictly Ballroom, Romeo + Juliet, Moulin Rouge!, Elizabeth, Muriel’s Wedding).

Using it feels very logical, like editing film back in the day. Plus it has all the bells and whistles of many new digital tools. It is a professional tool, not a semi pro or domestic tool that has been dressed up. So expect to invest time in learning how to use it.

It seems that the guys who released it free plan to make money selling plugins which in this world is a smart tactic. They have also committed to keeping free. AND it’s open source, so that should be VERY intersting to see what evolves naturally.

I would be interested to hear how you get on as I REALLY like the idea of having a NLE suite on every computer in my office.

3 Responses to Which editing software should you use? Avid? Final Cut Pro? …Lightworks?