Want a free one day workshop from two of the biggest names in American Indie cinema? With nearly 100 movies and a raft load of awards, Emmy and Oscars nominations, you can be sure that Ted Hope and Christine Vachon know their stuff. Here’s what people said about it when we ran it last May…

‘To be taught how to “package a deal” from the guys who made ‘Poison’, ‘Happiness’, ‘Kids’, ‘Boy’s Don’t Cry’ is a near- miracle’
George Hobbs, producer/writer, London

‘This inspired the bejesus out of me. I did think it was going to be more aimed at Directors and Producers but I think it served well as a grounding for Writers who have delusions of where their place in the process lies. I’d recommend this to any writer if it comes back again.’
Gail Hackston, Writer

‘Amongst all the information so freely available online, it is still invaluable to hear people with so much experience talk, in person, so eloquently and passionately’
James Lane, director, Sussex

Above is just the first part of the workshop – you can watch ALL of it by heading over to www.AmericanIndependentsDay.com 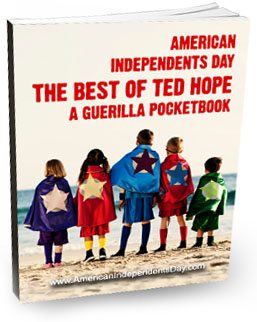 How Filmmakers Consistently Climb Mount Impossible... Four strategies to get you on set
5 Ways To Get Top Talent Attached To Your Screenplay by JK Amalou
How to cut a budget, the secret illustrated directory of cheap big name stars, who really ...
Richard Holmes Eight Rules for a ‘tightly resourced film’ screenplay
What ONE thing MUST you get right in your next film?
Guerilla Film Makers Masterclass Early Bird Ends This Week
Christmas horror shocker for film makers… BEWARE!