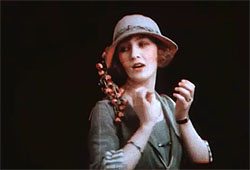 I came across this footage a few days ago, a sample of some of the earliest color motion picture film you will see, while researching Kodak and their current dire financial situation (which may force them into ‘Chapter 11’ in the USA) for my blog entry on chages in 2012 for filmmaker. It’s odd to look at these images and know that all those people are long dead. There is a message in that.

Reading some of the viewer comments on the accompanying Kodak site also revealed how so many people are resistant to change. They hold on doggedly to the notion that film stock is better than digital formats.

It reminds me of those arguments about vinyl being a better medium for music than CD. And then how CD was better than MP3. All of these arguments may be correct (the film one too), but it’s not about which is better, it’s about how people use it.

You can’t fit a record turntable in your pocket like you can with an iPod.

And the way people watch films is changing too, not just how we make them.

As a film maker I may not like the idea of someone watching my film on a phone (click here for a hilarious David Lynch clip on the subject here suitably illustrates how I feel about watching movies on a phone).

But like King Canute, as much as I try, I cannot hold back the waves of change.

While I cannot stop change, I CAN embrace PROGRESS.

Progress is an activity. It’s something you do. It’s not passive.

Shooting, editing and distributing digital is CHANGE. It’s happening and we can’t stop that, just like Canute’s waves.

However, what we choose to make with these new tools is something we can embrace. And that is PROGRESS.

There are no barriers to entry now, just a great idea, tenacity, adaptability, courage…

Personally, I try to spot change on the horizon, then adapt and adopt as quickly as possible. For me it keeps things fresh and exciting, a place I relish. I urge you to join me in this dynamic new club.

And unlike other clubs in the film business, the only entrance requirement is a desire to roll your sleeves up and have a go.

Watching the early Kodak test film above really does highlight how massive progress was made in motion picture film stock in the 20th century. It also illustrates how everything has a natural life span, and the writing is on the wall… film stock is headed for retirement.

The big takeaway for me though are the people in the film above. They really illustrate the transient nature of life, how short it is. I am sure when they shot this film, they looked forward to long and exciting lives. And yet here we are, and they are long gone, just this short and anonymous record of their existence.

So the question for me and for you is this…

How do we best take advantage of the time we have?

Decide on what you want. Not what you say you want, not what occupies you day today, not the habits you have developed… but that thing you REALLY REALLY want. That thing you want like a child. Singular, obsessive and outrageously out of your reach (or so it may appear).

And then take massive action to achieve that goal.

For one day, like the Kodak test actors, you will also be gone. Time is ticking.

Do it now… No-one else will do it for you.

UPDATE – Just seconds after posting this, I see Kodak HAS filed for bankruptcy protection. This is a day for film makers to really consider the future and their role in it.

Making 'Ink' with Jamin and Kiowa Winans
The phone rang, and from that moment, everything changed... PART 1
Lyn The Fin Inspires Us All...
So we got another email from Oscars.org…
'Welcome To The Punch' writer director Eran Creevy interview about how he broke into the f...
One award winning film makers view on The Guerilla Film Makers Masterclass….
Kodak back from the dead? A personal message from David Webb, General Manager, Entertainment Imaging, Kodak Limited (UK)

2 Responses to For filmmakers in 2012, change is constant, progress is not…