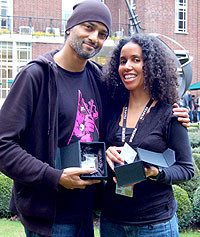 Last year film maker Anil Rao attended the Guerilla Film Makers Masterclass. Then he entered the London Screenwriters’ Festival short film competition about the London riots with a film he put together in just one day… and he ended up winning (film above – official page about the competition here).

He recently posted his thoughts about the Guerilla Film Makers Masterclass on Facebook, and I thought I would share them with you here…

‘This course is an absolute must for a real world understanding of film making and not some film school fairy world. The film industry is the hardest club to get into, and only the strongest wills, will find the tenacity in life to stay that journey to get there. It’s not a visible world, and the only area that is in the public domain is the only area the media can talk about without it being boring, the post work part, the parties, the festivals etc, the superficial part at the end of the day, the mask!

However there is so much more!!! All the important stuff to let your creativity shine and for you to succeed, for example, the business of film! This is what you need to get firmly fixed first into your head before you put idea to paper, and all the personal barriers that will befall you, is what Chris Jones takes you through with great wit and charm and with such a down to earth friendliness, you will be both in tears and laughter.

There is very little out there, that I would go out on a limb and state, you will not regret it, especially when it comes to filmmaking, yet this jamboree is essential no matter what level you are at and no matter what role you are in, all you need is an genuine interest in film, one thing’s for sure, at the end of it, your eyes will be open in more ways than one, and because it’s so personal, you’ll empathise and understand the pain of it, which you cannot find in film school, books and other self-help products. I sincerely hope you go on and conquer because, after 23 years of doing this professionally, very few do.

Oh and for this price, you really are taking him for a ride, so get your business cards printed up, and get on board now, and when you get there, make sure you dance with everyone like no ones watching, as this is about connections. Chris just plays the sweet music for you to dance to. 🙂‘
Anil Rao, Film Maker