Find out how Brit Film makers with no track record made a killer psycho horror and released it worldwide. Case study: Panic Button

The Guerilla Film Makers Masterclass is running over the weekend of Feb 18th / 19th – and we are holding a Friday night launch event where you can pick up your pass early, network with other film makers… and meet two VERY special British film makers who are making movies RIGHT NOW. 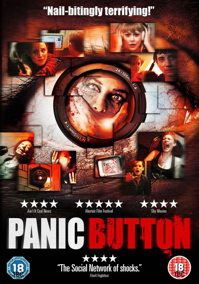 I will be announcing our second guest tomorrow, but first, I am delighted to announce that our first guests will be the team behind hit Brit psycho horror ‘Panic Button’, headed up by producer John Shackleton.

Made for an estimated £300k (according to IMDB, I am sure John will confirm that, or not!), ‘Panic Button’ is a terrific high concept chiller… trapped on a plane at 30,000 feet, four people are forced to play a game for their lives and the lives of their loved ones, manipulated by their invisible captor who seems to know all their most intimate secrets. It’s the Social Network meets Saw.

Among many other things, we will be discussing…

And remember, the ‘Panic Button’ team is just ONE of two groups of film makers sharing what they have just learned making their movies… You can get ‘Panic Button’ on iTunes, DVD and BluRay now – I urge you to watch it before attending this session.

Live Feedback From The Guerilla Film Makers Masterclass With #GFilm Hashtag
What's the secret to getting through a huge script on limited resources?
Has The Guerilla Filmmakers Handbook helped you make YOUR film? I want to hear from you...
And it was all going so well... Or was it? Filmmakers, Screenwriters, Creatives... Are you...
Everything you need to make a feature film for cinema release
CrowdFunding 101, ‘The Urn’
Why Iron Sky could NEVER have been made without crowdfunding