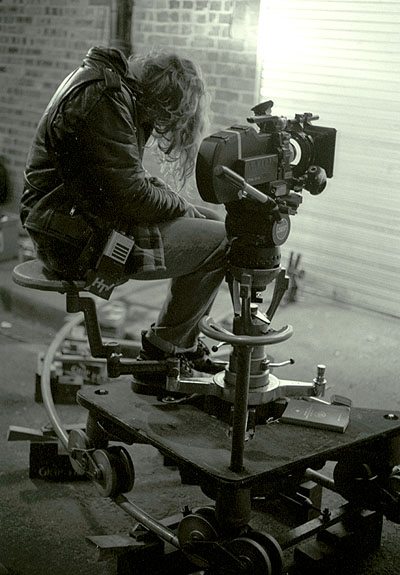 Every film is a prototype, different story, different locations, different characters, different crew, different… well different everything. And so there is no one size fits all. If that’s the case, how can you work out how long it will take to shoot you film, so that you can budget and schedule accordingly? Post the London 48 Hour SciFi challenge, here are some thoughts about how long stuff takes to shoot (especially relevant to features) and how best to approach it….

Simple dialogue scene
A couple of pages of two characters talking to each other is a scheduling godsend. Think of creative and interesting ways of covering this scene in a single shot. In my second film ‘White Angel’, the serial killer character occasionally recounts tales of his murderous activities. The dialogue and performance was captivating enough that we could  stay on one shot , sometimes for up to four pages. This means four pages in one setup, for just an hour’s work.

Simple dialogue scene version 2
Another simple way to get through pages quickly is to treat a dialogue scene as two simple reverse shots. Typically used for people talking to one another over a divide such as a coffee table, shop counter, bar etc. Shoot a mid-shot, then zoom in for a close-up. Then re-set the camera for a reverse mid-shot followed by a quick close-up. This will give you four shots from which to cut your scene. This will give you flexibility in the cutting room.

Complex dialogue scene
Scenes with several characters interacting can be difficult to cover as it becomes a bit of a head screw for the director to do multiple reverse shots, whilst under pressure. You maybe forced to shoot the scene like American TV shows such as ‘Friends’. The camera /cameras are always on the same side of the line meaning that pretty much any shots should cut together without looking too unsightly. These kinds of scenes often take longer to shoot than you expect.

Action scene
Anything that involves a degree of action will take longer than you expect. This is mainly due to the fact that you need more shots as the pace of the editing will increase, and also that shots need to be meticulously choreographed. Stunt sequences are even slower to shoot due to the safety preparations. Wherever possible, get an active second unit to handle these kind of sequences.

Nightmares
Add to any of the above the words ‘night’, or ‘rain’ and you are in for a glacial paced shooting nightmare. The rule of thumb is that it will take four times longer than you expect to shoot anything at night or with rain. Don’t under-estimate how long it takes to set up lights in the dark.  Wherever possible in your screenplay make night into day and delete the word rain.

Track and cranes
Any time you use track and dolly or a crane, your shooting time will double. It just takes that long to set it all up. On the up side, a dull two-shot covering a page and a half of dialogue can be seriously spiced up by doing it with a track and dolly and keeping the actors moving. It will take longer to shoot than a simple locked-off shot, but the result will be much more attractive and energetic. Be pragmatic in your choice of track and dolly and crane shots.

VFX
Whether it’s gory zombie effects, or shooting stuff that you will know needs work in After Effects, shooting effects takes forever, and it’s best broken out into a micro shoot or second unit crew.

Production
Always remember that the actors and cameras are only part of the equation. Crews need to get to and from locations, actors need to rehearse, actors need to change costumes and make-up, lines of dialogue may need to be wild tracked, locations and sets may need to be re-dressed etc. Factor these set-up, re-set and wrap times into your schedule.

Mixed bag
Other factors that will regularly drag you behind are…
A camera team that is ponderous. Bad planning. Too many takes (usually fuelled by an inexperienced director). Actors consistently fluffing lines or not hitting their mark. Simple errors (such as costume continuity) which force a re-shoot. Exhausted crews slowing down as they don’t have enough rest time. Too many location changes. Poor co-ordination between the set and the actors in their green room. Taking too long to get up to speed each morning as crew are late due to too little rest.

Why make your film if you can’t get distribution?
How to make tough film career choices

2 Responses to Hurry up and wait… How long will it take to shoot your film? Top ten tips