Post the 2012 Sci_Fi London 48 Hour Film Challenge, I asked some of the film makers to share their experiences making their films, so that we might learn from the successes and failures. First up is Jake Wynne, heading Team Superluminal 2012 and his film ‘Eight Items’. Take it away…

I am a director working in the fields of Commercials, Music Videos, Short Films and Online content. I have been in the business for 17 years and attempted the SCI-FI challenge last year, but was not entirely happy with what I handed in.

The main reason for entering again this year was to prove to myself that I could rise to the challenge and produce top quality work, with a great idea and in the time scale given.  I am used to dealing with short turnarounds, and working through the night is certainly not alien to me (pardon the pun).  However, having no real script and not knowing what your story is really about, is quite terrifying for someone so used to hardcore preparation!

I knew I was going right out of my comfort zone…and that was the very reason why I had to do it!

Last year I had an amazing crew for the production side of the challenge and produced some beautiful pictures, but my story was non existent, it didn’t make sense to me or the actors, but we thought we would ‘find’ our story as we went along.  Big mistake!  I also thought I could edit the film myself and do all the sound/music, and this is after shooting for 1 & half days!!!!!

I learnt some hard lessons from last year and approached this one with my eyes wide open.

I knew we needed to secure some locations so I thought about the most convenient location I could think of and one that would help us get to the next one…a car!

I also loved the idea of starting with a very visceral action sequence, but didn’t know what it would be yet! 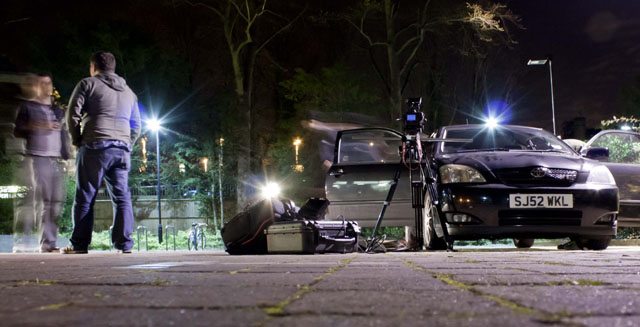 Then I needed a more controllable space that had an outdoor feel but had access to power.  I found the back of an Arts Centre and they kindly allowed us to film there during the later hours.  So I knew I could film during daylight and night and decided I need to design my story to make use of this switch from day to night.

I also needed great actors, so was lucky to hook up with two that I hadn’t worked with before but had seen their work and they came highly recommended, namely Alexis Rodney and Morgan Watkins.  The third actor I wanted, and I love to do things in 3’s, was my father, Gilbert Wynne.  He is a professional actor and I knew I could ask him to be on standby as I had no idea what his role was to be yet!  It might have been a tiny part, or a full blown lead!  As a result I was less worried about offending an actor I didn’t really know, and not as concerned about keeping them waiting to shoot till the early hours (My dad was a real trooper).  This proved to be a good decision.

When we got our criteria we decided to go with a chase start which would get the audience in to the story and characters immediately, almost like an ambush.

Then we would follow our two ‘gangsters’, one from up north and the other from Russia, as they transport a case to another location, hopefully in exchange for a lot of money. They have never met before and do not like each other either, and so the conflict begins, the moment the film starts. 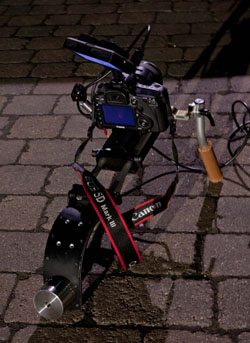 I will not outline the story as I’d like the viewer to discover it for themselves, but the criteria really helped to dictate the course of events and gave a sort of shape to the film.  I was happy with this outcome as I wanted the criteria to be vital to the structure and narrative.  If you took the criteria out, the film would collapse and make no sense. This approach was our bible for making the film work I think.

All the elements in the film are subjects I love, with conspiracies being universally appealing I think.

I wanted to make a visceral film that was exciting and mysterious, with an ending that didn’t neatly tie everything up, but maybe leave you wanting to know more.

Probably the most important one.  Make sure you truly know your story and you have made the criteria completely integral to it: Do not start shooting anything until you are excited by what you have written. Why bother putting all the effort in over the two days unless the idea enthuses you?  We spent the first 6 hours writing and didn’t start shooting until 6pm on the Saturday (We wrapped @ 6am Sunday morning)

Have some locations prepared:  This gives your shoot day a structure and a schedule to keep to. It means you can shoot all through the day and night and gives you flexibility.  Keep them generic unless you know you want to film in a warehouse or Underground bunker etc!  Get permissions, don’t just totally blag it because if you’re shut down the film challenge stops right there!  I was surprised to be informed on the Friday night that 2 large shipping containers would be dropped right on top of our planned shooting location the next day. At first fearful,  I soon realised this could be a fortuitous and may make my location even more SCI-FI. Be prepared to go with the flow sometimes.

Get a sound person and don’t shirk on this:  People forgive bad pictures when the medium your shooting on is relevant, but only if the sound is rock solid.  It does not work the other way round. Sound is 50% of the film experience and should never be underestimated. I nearly didn’t have one and found an excellent guy a few days before!  Ask other film makers for recommends.

Have main areas of crew covered:  Do not try a do it all yourself. Delegate carefully and you will see your production values soar. The  more time you have to ‘direct’ properly, the better your story and performances will be!

Have Post crew sorted:  Get a separate editor. Do not try and edit yourself, and this is coming from a Director/editor with 17 years experience.  I could edit but chose not to.  You need to keep an objective head. You will be exhausted. They are fresh and see the film through what you shot, not what you thought you shot!

Feed your crew super well:   I can not emphasise this enough!  Seriously gets around working through the night.  And have food they can nibble on as you shoot, keeps the energy up.

Get a composer:   Makes all the difference to the finished film.  They will hit all your emotional points and also tend to be more controlled with the use of music then a tired director would be.

Get a few hours power naps here and there when others are putting the film together.

Stick to your guns and listen to your gut instincts, they are always right!

If you have good actors, let them improvise around a theme or subject:  You will probably never have time to write out a full script let alone have the actors remember it all, so this approach can often lead to great naturalistic dialogue. I utilised this massively in my opening scene in the car.  We ended up shooting almost an hour of footage for a 2 min scene, but I think it was worth it.

Do not shoot too much if you can help it:  I know I just ignored my own advice, but generally if you can shoot efficiently, it  makes the edit quicker and decisions become faster. Sometimes though you just gotta get that line or shot, and I totally understand!

Try and shoot your idea on the first Saturday, and through the night if need be:  You will appreciate the time you have in post production on the Sunday to get to that ‘mature’ edit stage, the one where you know the edit is as tight as it can be!  (This is not for everyone, but it worked for me)

Art director:  The unsung hero’s sometimes,  but take such a weight off your shoulders when you’re directing.  They will just get the contents of your frame looking right before you even realise that it needs doing! Even if it’s a helper delegated to the task, make sure its not you doing that, its too distracting!

Try and get a few lights: Even small LED lights can help make a face look more sculpted in the dark (and even in the day) This will immediately raise your production values. The small amount of  money we did spend on the film challenge actually went on Food (the biggest portion) and lights. Camera kit was graciously donated by friends. 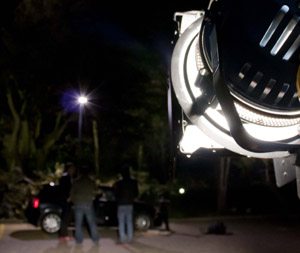 Our biggest challenge was tiredness and keeping ourselves focussed. Good food and plenty of liquids helped solve that.

Work backwards from the time you want to hand in your Disc at the Apollo Piccadilly, by calculating the travel, the DVD burn time, the export/render time and the final tweaks stage. This could take you back a lot further than you anticipated.  Then go an hour further back again!  This is now your cut-off point for your SCI-FI film,  and don’t break it!

I enjoyed my SCI_FI 48HR FILM CHALLENGE a lot more this time round as I felt I understood the aim of the whole thing better and also went in to it determined to have fun!

Hope this helps some people 

Thanks Jake, all great advice.

Entering competitions and funding processes - top nine tips from the real world
So we got another email from Oscars.org…
Near Kisses for 50 Kisses
Top Ten Reasons Why Screenwriters Should Consider Producing
SciFi London Case Study Project 3: Simon Cox