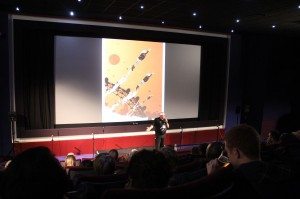 Yesterday afternoon at the Apollo Cinema 20 excited teams of film makers gathered to see who would emerge as winner of the 2012 Sci-Fi London 48 Hour Film Challenge. Having watched a few online I had some idea of the quality this year and had very little hope of our film getting any further than the short list. However I was excited to see what other teams had done. The 48 hour film challenge is very much about the taking part and not the winning. Anyone who managed to get a film finished should be proud of themselves. Of over 360 teams who entered only 171 managed to get a film completed by the deadline. Having said that with a development deal with Vertigo as 1st Prize there was a lot at stake.

After an intro from Louis Savy the festival director who promised us we were in for a treat we settled down to watch the shortlist. Before that two other films had been selected for us to enjoy. They were hilarious both intentionally and unintentionally. It got us off to a fine start.

As we went through the films I decided I didn’t envy the judges in having to make a decision. 20 films of absolute quality. Amazing what people have managed to achieve in a weekend. It’s always fun to see how people have used the random elements to make their films. Some of the interpretations were genius. Our film Backwoods seemed to get laughs in all the right places and got some warm applause at the end. Certainly seemed to be a crowd pleaser. Also glad glad my slightly ropey compositing looked ok on the big screen. I think we had the coolest VFX shot of the night too. 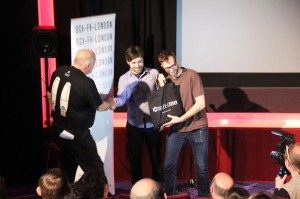 A top three had to be decided though. Third place went to Jake Wynne and his Superluminal team for their film Eight Items (watch here). A film that featured some of the best and most natural acting in the competition. It starts brilliantly by dropping you right into the action and uses the random elements extremely well especially the very difficult line of dialogue they had.

Second place was team Bughunt (watch here) with their film 6 Minute Leap. Very stylishly shot and a film that really sets up all the elements and ties them all together brilliantly in the final few moments. It’s difficult to say more without giving stuff away so just watch and enjoy it yourselves. 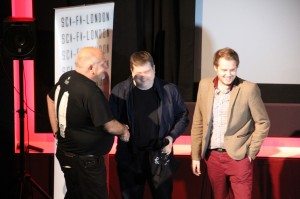 First place was a very popular choice. A film that has already got a decent following of fans online including Graham Linehan. Future Inc. is a film that has such warmth and charm it really did stand out from the crowd. A nice and fully rounded story with wonderful performances and real heart. Conrats to Martin Stirling, Andrew Ellard and the rest of the team. A well deserved win (watch above). 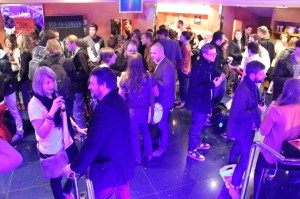 chat to our fellow finalists. Was nice chatting to some of the other teams who I’d been following on the always fun twitter feed as the films were being made. Always good to put faces to names. Louis’ final words to us was to encourage us to go make a feature film. With that much talent in the room the British film industry clearly has some brilliant young talent around so lets all go make some features.

The whole shortlist will be online soon and I urge you to take the time to sit back and watch them. You won’t be disappointed.

Same again next year everyone?

Near Kisses for 50 Kisses
So we got another email from Oscars.org…
Entering competitions and funding processes - top nine tips from the real world
SciFi London final case study… Tom Worth on his TWO SciFi shorts!
My first movie, ‘Necronomicon, book of the dead’