The strategies for how you can monetize and exploit your film should be developed at the same time as writing a screenplay, not after.

Listen, I get it, filmmaking is a long haul and most filmmakers think that distribution is the final hurdle to success… let’s make a great movie first! If you look at your project chronologically, it looks like that’s the case. But it’s not. Trust me.

The success or failure of your gaining the best and appropriate distribution for your project is based on the choices you make BEFORE you make your film. Not after. We now live in an interconnected world where old school distribution is collapsing around us, and it’s the wild west out there!

A holistic approach to your film is now what is needed, not just conception and manufacture. Crossing your fingers in the hope that you will get some kind of distribution simply won’t cut it any more.

This is all GREAT news, because we are now in control of our own destiny – distribution and monetisation.

And this message of our Think Outside The Box Office Masterclass over the weekend of June 23rd / 24th, with Californian filmmaker Jon Reiss.

In essence, how can you significantly improve your audience reach, your distribution platforms and your bottom line right now?

Jon is a filmmaker just like you, and he gave up working with distributors on his last film as he became disillusioned. He then forged new techniques in distribution, exhibition and audience engagement, turning his film into a commercial success and spawning a sequel! To say that he is the Godfather of the modern distribution movement would be no understatement.

The two day workshop will give you the future proof tools you will need to drag your movie the dungeon of old school distribution into the brave new, dynamic world of hybrid distribution.

You worked your ass of making the film, now get the rewards you deserve!

And if you want to see Jon in action, here are five short video seminars… http://www.distributionmasterclass.com/watch/ 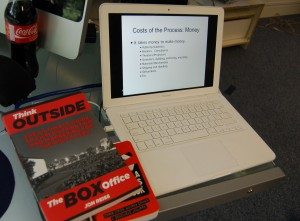 And remember, every delegate gets a digital copy of Jons book when they attend.

What ONE thing MUST you get right in your next film?
Self Distribution for UK Filmmakers - what are the two KEY relationships you MUST nail?
Top Seven Tips To Crowdsourcing from Iron Sky creator Timo Vuorensola
How one filmmaker secured a UK distribution deal for their £30k horror movie WITH advance!...
How You Can Define Success for Your No-Budget Guerrilla Film by Brian Barnes
The Essential Low Budget Film Makers Sales Agent and Distributor Delivery List
How Caine conquered the web
The most important movie in my life was ALIEN… Here’s my ‘Prometheus’ review