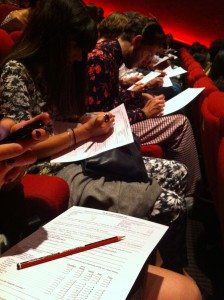 I recently attended a test screening of a feature film at BAFTA and I thought I would share my thoughts on common editorial mistakes when close to locking picture.

Common mistake number one… It doesn’t make sense (the elephant in the room that the film makers cannot see).
Everyone who read the script, then saw the actors perform it, and finally viewed the edit, will have no problem understanding the story. But they know the story, unlike the audience who get to experience it for the first time when they see the movie. Subtleties of performance or lines of dialogue that mean one thing to the filmmakers can mean something almost diametrically opposed to the audience. During your discussion after the film it’s a good idea to check that all your plot mechanics are working, that all your character inter-relationships are understood correctly. Otherwise, you could end up with one audience member thinking Bob and Jane are brother and sister, whilst another audience member may think they are husband and wife. Clearly, this presents two very different stories. Confusion will mean your story breaks down and audiences will be left frustrated.

Common mistake number two…
All those times in the cutting room when the director was saying ‘no, no, no, it’s a beautiful shot, let it breathe…’ will now haunt you. You will sit through this screening wishing every single edit came just fraction faster. In your head, you will be screaming ‘no, no, no stay awake because the next scene is really good…oh dear god, hurry up, hurry, hurry, hurry’. If the director is present at this screening, it maybe a wake up call but beware, it may lead to further denial – ‘they just don’t understand my art…’

Common mistake number three… Too Heavy handed
Being expert consumers, audiences are extraordinarily adept at extracting information from subtlety. Usually, this comes from an actor’s performance, where lines in the script can often be dropped because the actor is saying so much more with their being. For instance, an actor filling up with tears may not need to say ‘I love you’, their performance says it with greater profundity and subtlety, the words end up telling the audience how to feel instead of allowing them to find out for themselves. In the same ballpark, you may find that you can drop large chunks of dialogue that seemed to be important in the script, but somehow have become repetitious or overstated in the final movie. In all instances, these are very tough edits to make and ultimately, the only way to be sure that the choices you have made are right is to put it in front of an audience.

Common mistake number four…Bad, bad film making
There is no magic formula here, aside from a re-write or re-shoot (which still may not fix it), but if your movie has a moment that is truly awful, cut it out. If you can’t, reduce it to the very least it can be: it’s barest essence. Don’t ever linger when you know the scene is sooooo bad that you are going to shatter the suspension of disbelief in your audience. Fight hard for additional shooting days, it’s NEVER over until you say it is.

Common mistake number five… Fake mistakes
Ironically, much of the stuff you thought of as a problem, such as dodgy edits, shaky camera work, soft shots, poorly executed scenes, slightly unconvincing sets or locations etc., just aren’t a problem. The same is true of continuity. Whilst you were in the cutting room you would say ‘no, no we can’t do that, we’ll never get away with it…will we?’ It turns out that very often these things will go completely unnoticed by the audience. They won’t notice slightly poor technical filmmaking, nor will they be impressed by what you think of as great moments and flashy sequences. They just want a good story told well. They simply want to connect with the story and characters and be taken on a story journey. They only notice small problems when they have disengaged with the story.

If only we could turn back time
During cutting, alarm bells will occasionally begin to ring and you will remember all those times in script development when someone would say… ‘You know you have a problem here…’ and you’d reply, ‘oh we will get away with it…’, ‘no-one will notice that’ or ‘we don’t have time to improve the script, we have a movie to shoot!’ All the problems with your screenplay will now stand out ten feet tall. You’ll spend a large amount of time working your way out of corners that you could have avoided with more script and story development. But it’s a double edged sword, sometimes you just have to go shoot your movie, even if the script isn’t ready, or momentum may be lost. But as a rule, the old saying is sooooo true… ‘If it ain’t on the page, it ain’t on the stage…’

Finally, listen to feedback. No-one is EVER wrong. EVERYONE is an expert in their experience. Some people won’t like it, some people will love it, but it MUST make sense, and be as tight as two coats of paint.

Editing masterclass with editor Eddie Hamilton on X-Men: First Class and Kick Ass
Editors career plan at BVE 2013
Seven Editorial Tips For Fine Cutting Films
How to recut and remix your film… a terrific example
Something for the weekend? Editing Masterclass with Walter Murch
Why do you need a DCP when you can screen your movie in full HD in a cinema from an iPad?
Top ten Reasons Why Film Makers Screw Up In High Level Negotiations

One Response to Testing your film with an audience, top five editorial mistakes you CAN FIX