By Chris Jones on June 1, 2012 in Distribution, Screenings 2 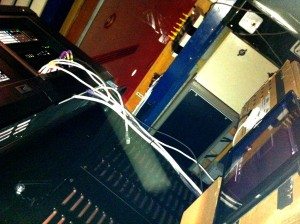 Last night I attended a top secret test screening of a feature film at BAFTA. It was an incomplete cut of the movie, exported from Avid (DNxHD36 codec) at 1080P and transcoded to an H.264 Quicktime file at 8000kbps, with audio in AAC at 320kbps (entire file size just under 6gb).

This file then played back off an iPad 2, and was pumped directly into the Barco DP2K-32B digital cinema projector via HDMI. The sound was passed through a small mixing desk (as the iPad audio doesn’t provide enough level) and through a ground loop isolator to kill unwanted electrical humm (which is often a problem with unbalanced sound), before being zapped into the processor and spit back out as Dolby 5.1 (the picture here is not great, but it shows the iPad at the bottom, connected to the projector via HDMI). 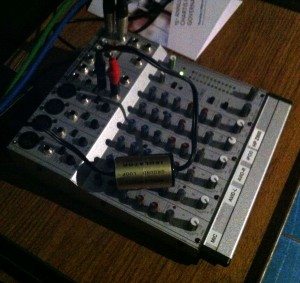 To my eye, the image looked VERY VERY good and the sound was equally excellent. Yes there were some visual artifacts occasionally (and a little 35mm dust and sparkle), but really, it was nothing to get worried about. To the untrained eye, I suggest that the film would have looked and sounded as good as any movie ever looked in a cinema.

What’s astonishing about this is the fact that this was a 6gb file, played back on a consumer iPad, which NEVER skipped a frame, looked and sounded amazing, and was made on a desktop computer. We have all be led to believe that only a DCP will play back in a digital theatre. I always knew this was not the case, but now I have seen it in action, I am questioning why, if I know what I am doing, why I need to spend thousands making a DCP? Of course I know distribution is not setup to get iPads or USB keys with Quicktime files, but that’s not the point – the point is that it works and it looks and sounds great.

Of course, the file is also password protected on the iPad by default, offering some low level security (no to mention the ‘find my iPad’ tracking built into the iPad architecture).

LA Screenings Video
Dynamo Player shuts down.
How to run your own micro theatrical release in London: Case Study
I promise you, World Record Breaking film ’50 Kisses’ is going to be MASSIVE in Birmingham...
Why are some film makers resistant to getting involved in distribution?
Ten simple ways to make your film pitch more effective
Testing your film with an audience, top five editorial mistakes you CAN FIX

2 Responses to Why do you need a DCP when you can screen your movie in full HD in a cinema from an iPad?