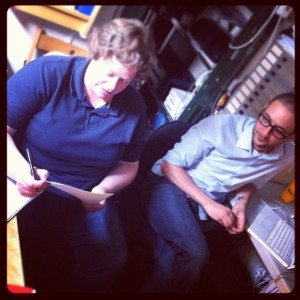 We have spent weeks refining 1,870 scripts that were submitted to 50 Kisses, down to the final 50.

We got there over the weekend, but then we discovered we had a problem.

We effectively had a first draft of a feature film, and like any first draft, it’s not ready to be shot.

The main difficulties were…

1. Some scripts had similar themes and scenes
2. Too many stories had kind of ‘high concept’ ideas that on their own would be fine, but fifty one after another would simply be too much.
3. The proliferation of high concept ideas had nudged out more reflective stories, and we needed greater balance.

So we have had to select the very best of the shortlisted 50, and then go back to the long list and look for scripts that compliment these screenplays – that is, scripts that work as one fiftieth of a whole.

Of course none of us wanted to go back to the long list at such a late date, but I know from experience that we need to get it right on the page… or it will be a disaster on the stage! This may be a competition but it’s also going to form a feature film and we need to keep an eye on the overall movie that the audience will experience next February.

We have also committed to taking some scripts through development too.

We are going to invite some of the writers in the top 50 to engage with us so that we can discuss notes and ideas on how we think their entry could be improved, made more ‘shootable’ or made to fit better with the other scripts in 50 Kisses.

We will also invite all 50 winning writers to engage with filmmakers for further rewrites, should the filmmakers or writers wish to do so. It’s not obligatory, but to us, it seems like a good idea. We will make sure that all drafts of the scripts will be available on the website too, so you can read the developmental arc.

Hopefully, this will result in stronger scripts and a better movie. It’s also standard industry practice, so it’s a good thing to keep us all on our professional toes.

Overall, 50 Kisses has been a hugely rewarding experience so far. I can only see that it will continue to get even better.

We hope to release our final 50 scripts on Friday. If you would like an email to tell you where to get the scripts so that you can also make a film, join the list here…

50 Kisses gets a 15 cert and the release master plan comes together!
50 Kisses Competition Heats Up - can you design a movie poster?
Can you write a Twisted Short Story to be published in our collection of Spine Tinglers?
50 Kisses in Digital Filmmaker Magazine
50 Kisses HUGE Box Office Success... The numbers are in!
‘50 Kisses’ has its first pre-production poster
‘50 Kisses’… and the winner is…