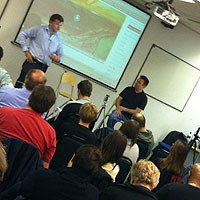 It’s coming back to London after touring the USA for the last year! If you are considering Documentary Film Making, you should come along. Here’s what’s on the website…

Join hundreds of doc filmmakers for a two-day event that details cutting edge and contemporary documentary film making techniques, strategies and success stories, from conception through to completion.

New film makers across the world are creating extraordinary documentaries, reaching audiences, making both money and a name for themselves, sometimes even catalysing profound change in the way people behave.

THE DOCUMENTARY SUMMIT will take you through EVERY step of the process, discussing the more important aspects with our visiting industry experts.

Join hundreds of documentary film makers just like you
Central to the summit however are the delegates. After running large scale film making events over the last year (The Guerilla Film Makers Masterclass, London Screenwriters’ Festival, Comedy Writers’ Festival), we have found that the community and collaborative possibilities presented by the delegates at the event are just as essential as the speakers on stage.

So come and join us for the Documentary Summit, a learning and networking experience like no other. http://www.documentarysummit.com/

Amanda Palmer and her TED talk on Crowdfunding, 'The Art of Asking'
Final FREE Xmas PodCasts on 2 Documentaries...
Meet Jamie Benning, creator of 'Filmumentaries'. We LOVE him!
"From One Second To The Next" shocking doc about texting and driving by Werner Herzog
6 Secrets to Getting Cinematic Footage on Your iPhone
Have you thought about it?