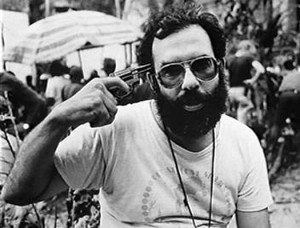 The documentary behind the making of Apocalypse Now (Hearts Of Darkness) is for me essential viewing for all filmmakers. I have recommended it on pretty much every course I have ever run as it’s one of a handful of docs that genuinely captures the madness of production.

Watching it always reminds me of my first movie, The Runner – we were kids wandering North Wales mountains with too much kit, too much caffeine, no boundaries, automatic weapons and a heck a desire to leave our mark on the world. Madness yes. Great film? Well it was certainly ambitious and a great experience.

In ‘Hearts Of Darkness’ Coppola pretty much predicted the rise of technology and decentralisation of filmmaking. We find ourselves living into these exciting and democratised times, where cameras are cheap, collaborators a tweet away and distribution channels opening up daily.

I have also seen a slightly worrying trend too. When I was making my first film there was really no indie film scene. As such, my only influences and sources of inspiration were the films that made it to the cinema.

A worrying trend I have seen over the last few years is filmmakers competing with each other, attempting to fund their films from each other and seeking inspiration from each others work. I am all for innovation, and you certainly don’t find much of that watching traditional Hollywood fare.

But watching Vimeo and Youtube, while there is tons of amazing stuff, I do see too much work that…

1. Is really a camera test or lingers in kit / lens fetish pornography territory.
2. Features filmmakers friends acting and not trained actors.
3. Has very very poor sound.
4. Has been sloppily edited.
5. Has been even more sloppily written.

I know a career in film is a long journey with many tests, shorts and mistakes before ‘the big one’. And I also know if we never break rules we will never innovate.

But I like to be sure that I am drawing my inspiration from sources that are worthy of my time and the audience I hope to connect with. I try to compete upwards and not on my current level, or worse, below my level.

The world is MASSIVE and filled with fascinating people, stories and new ideas.

Get a ton of filmmaking tips, tricks and articles every day
David Lynch and the Independent Filmmaker
What game are you playing and who are you competing against?
Monica Lewinsky and the price of shame: Why we ALL need to open our hearts to her message
Why the act of creation is ESSENTIAL for human beings
Stunning Wingsuit Documentary: Split Of A Second
Lost the plot? Why taking notes is essential for screenwriters
Success is so often a mirage, the journey is so much more important than the destination

4 Responses to Where are you drawing your inspiration from?