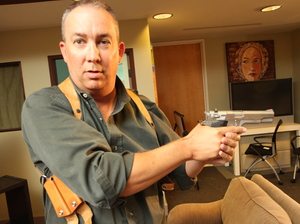 Gen and Zee are running a two day workshop in LA for writers interested in Crime – it’s run by Sgt. Derek Pacifico who in his time in law enforcement investigated over 200 murders. Crikey! I asked him to share his top ten gaffs made by cop shows. If you want to attend the LA based Writes School, sigh up here and get $55 off with the code TALENTCIRCLE
http://www.filmmakerjunction.com/events/writers-homicide-school

Guns, guns and more guns with crazy ammo!
Hollywood has gotten a little better by sometimes having their characters reload their weapons, but often its a need to pause the action or cause tension. Even a small caliber weapon is going to run out pretty quickly with how much these guys and gals shoot up their cities. I could go on for pages about how far off the mark ofﬁcer involved shootings are portrayed so very incorrectly in movies. But movies are for entertainment not to document reality. But isn’t it funny that nothing is ever mentioned about all those bullets getting ﬁred that missed their intended target – in the real world they still hit stuff, expensive stuff and sometimes the wrong people. Don’t get me started on the tv/movie cops regarding how they hold their weapons, ﬂinch and generally handle their weapons poorly. You can tell the actors who aren’t afraid of their guns…

Rolling Hot!
Only in Hollywood do detectives turn on their lights and sirens and speed to a murder scene. Trying to save the dead guy? He ain’t getting any deader so what’s the rush, well besides the fact you only have 42 minutes plus commercials to get it all solved. In the real world, you’re going to be there for like two days doing a crime scene so you better get a lunch while you are on the way.

Crime Scene Screw Ups!
Get the heck out of the crime scene people! In the movies, there are usually a couple of uniformed officers and well, just people walking all around looking busy in the scene, touching things and collecting them all independently. WRONG! In the real world, the crime scene is done very methodically and is controlled by one detective. S/he will discuss with their CSI staff what, when and how things will get processed and they work together to prevent contamination and introducing any unnecessary items into the scene. In Hollywood, the crime scene looks like a dinner party sometimes.

Detective Surprise and Disgust?!
Why is the season veteran looking shocked or grimacing at seeing the body. Ever seen a scene when the veteran pulls back the not-supposed-to-be-there-in-the­-ﬁrst-place-sheet (see #3), and then gasps at what s/he sees? Really, dead bodies shocking you sport? You are in Homicide, before you made it there you were on the street in uniform responding to beating calls and murders for years before getting promoted… now you are shocked?

The lingo, jargon, mumbo-jumbo, dialect, patter, the talk baby!
Unless a local cop from the area helps the writers, or the writer was a cop from that region, the vocabulary is often going to be too generic or wrong all together. The difficulty of course is that the characters can’t talk just like cops because some of what they say is so inside the schoolyard that no one outside their own agency can even understand them. So there is definitely a line between the realism of the police’s spoken hieroglyphics and having universal understanding. But a little research is helpful. West coast cops call bad guys “suspects” and make arrests whereas east coast cops call them “perpetrators” or “perps” and make a “collar.”

Not enough family references – not all cops are divorced.
Surprise! Not all cops have wrecked and failed marriages and are alcoholics – (see #6). The reality is that weekend plans still exist, family birthdays, kids sports and an occasional round of golf. Real cops value their families and their jobs usually in that order. Plans are often wrecked or the cop arrives late to eat only cake or left overs. Some shows have gotten it right, but many of the wives are true heroes who know what to expect with their police husband, not angry bitter people waiting for him to screw up. And sometimes, cops can’t make it to Aunt Betty’s birthday party because he just needs much valued sleep!

NOT ALL COPS ARE DRUNKS!
More cops are becoming health conscious than ever before. The whiskey-cop with the bottle in his desk is from a bygone era. If an officer of any rank were to have alcohol in his office, opened, it would be cause for serious discipline up to and including termination. Drinking on duty, with a badge and gun on – not likely!

Super Cops never get hurt!
In the real world, if you hit a guy on the skull a couple times, you are going to break your hand or seriously injure it and you’ll be on the disabled list for a couple weeks. Also, by the way, getting punched in the face hurts…bad! Ever had a baby on your lap inadvertently head-butt you on the nose or lips. Brought tears to your eyes didn’t it? Well, when a 20 something year old male purposely balls up his ﬁst and swings full force and hits you on the face, anywhere on the face, it hurts! Hollywood cops need to get bruised up, teased for it and complain about pain once in a while.

The police and district attorneys are not enemies.
All too often the detectives are in some serious, on-going quarrel or distrust of the DA’s ofﬁce when in fact the cops and the DA’s are not only professionally friendly with one another, often there are real and true friendships, occasionally even some marriages happen between them. The police and DA are on the same team and work together; its a big family. Truth be known, even some of the folks from the public defenders ofﬁcer aren’t too bad and become part of the off-duty inner circle. In the courtroom its all business, but that doesn’t mean the trio can’t eat lunch together or show up together for the same civic charity event or fundraiser.

No report…no conviction
Rarely do we ever see the detectives doing their reports. Now, I’m not suggesting we show the investigators typing or dictating for hours on end, but some reference to doing the reports, reviewing them, having the boss send them back for corrections or just some verbiage regarding having to do or having completed the reports once in while would be great. 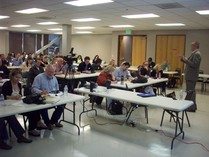 So if you want to attend the LA based Writes School, sigh up here and get $55 off with the code TALENTCIRCLE
http://www.filmmakerjunction.com/events/writers-homicide-school

“After taking Derek’s class and rewriting my dialogue, I saw an immediate difference. Producers actually called me in for meetings! Thank you Derek!”

“…an informative and entertaining instructor. I now know more about how real cops investigate homicides than I ever thought I’d know”

“Derek, you could have sent me a gold brick wrapped in a thousand dollar bills but I wouldn’t have liked it as much. Golden information. THANK YOU!”

How is your project represented when you move from online to the real world?
Has The Guerilla Filmmakers Handbook helped you make YOUR film? I want to hear from you…