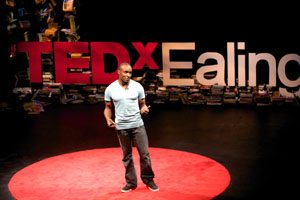 So the very first TEDxEaling took place on Friday, and what a day it was!

It was on the Thursday afternoon before TEDxEaling that I realised that I had accidentally produced a stage show with lighting, multimedia, theatrics, sets…

And coming from the film world, there was a lot of skills that could be transferred, but there was also a whole new skillset to learn too. More on that in later posts.

We filmed all the sessions so we will be able to share them with you over the coming weeks and months (full archive HERE). But for now I wanted to focus on my favourite speakers at TEDxEaling. I had two, the first being the creator of Parkour and freerunning, Sebastien Foucan – you will know him from the opening scenes in Casino Royale when he fought Bond on that big crane. Awesome stuff.

His session was about overcoming fear and you could hear a pin drop as he shared his own fears with great humility and candour. Hi revelation that he suffers from vertigo created an audible gasp as we had all just been watching him bounce off walls and leap across enormous structures.

His main message was this… You have to overcome to become.

He related the idea of how baby birds must be terrified when they take their first flight from the nest – but they must face their fear of ‘dying trying’, or ‘die staying’.

This really resonated around the room, especially with creative people who are stuck, afraid of failure or that their work will not be as good as they hoped.

I will get his session up online as soon as I can and I recommend you give it a watch.

Tomorrow I will share my reflections on young female Urban rapper Dekay, for me the highlight of TEDxEaling, ripping up the stage with passion, authenticity and raw talent.