Over the past days, a few people have asked for various things from my first movie and ‘baptism of fire’, ‘The Runner’ – photos, DVDs and the soundtrack. I shared the soundtrack on SoundCloud (above) and it got me thinking about what I learned about music on that first feature film. Here are my thoughts…. Why not listen to the score as you read? 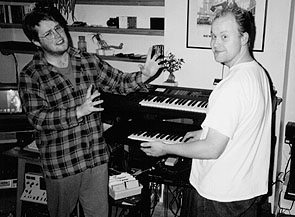 The soundtrack for The Runner was performed and recorded in our living room by Gary Pinder, using his synths and recorded to DAT. Both Genevieve and myself sat with him every minute of every day of every week while editor Mark Talbot Butler oversaw the sound track laying with Chris Dickens. I trusted Mark and Chris to sculpt and incredible acoustic world for the film and felt it was prudent to oversee the music score.

In the score you can hear heavy influences from Black Rain, Scarface, Blade Runner, Outland, even Rambo 3 – all of which were used in temp scoring the film. I was already a movie soundtrack nut and knew instinctively what each scene needed, after which I would whip out a cassette and we would watch a scene while also listening to a bit of Hans Zimmer or Jerry Goldsmith. Back then there was no way to sync temp music so it could only ever be used as inspiration (unlike today where you can lock that music to picture and fall in love with your temp score).

Good luck with your scores, and remember, start work early and keep it reigned in.

Writing The Score for Escape From New York
Notes for emerging composers… how to get noticed by producers
11 Steps Required to record your score with an orchestra in Macedonia – a Guerilla Masterc...
How to best use library music for your film – top 8 pitfalls to avoid
DVD Cover printing - How to do it

10 Responses to Top ten soundtrack, score and music mistakes made by filmmakers